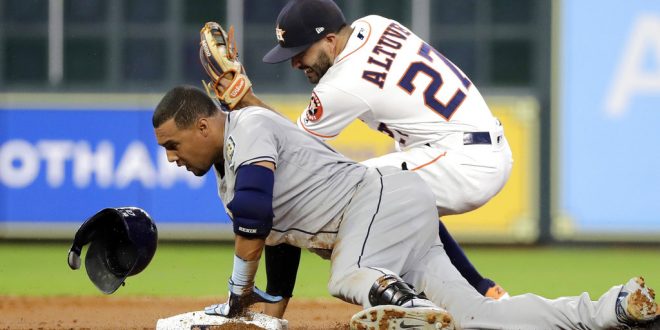 Tampa Bay Rays' Carlos Gomez, bottom, is tagged out by Houston Astros second baseman Jose Altuve (27) trying to stretch a single into a double during the second inning of a baseball game Monday, June 18, 2018, in Houston. (AP Photo/David J. Phillip)

The Tampa Bay Rays added another game to the loss column last night, falling 5-4 to the Houston Astros.

It looked like a win was within reach. Then, the Astros got into a groove that the Rays couldn’t figure out how to stop.

The Rays came out hot. Wilson Ramos hit a two-run homer in the first inning, giving Tampa an early 2-0 lead. Joey Wendle sent a grounder into leftfield in the third to extend the Rays’ lead to 4-0.

That was the last time Tampa would score.

The Rays didn’t get another hit until the eighth inning. It was unfruitful.

In the ninth inning, pitcher Sergio Romo had the chance to strike out the Astros and close out the game with a win. Instead, he loaded the bases and allowed the double that gave Houston the comeback victory.

The Astros were trailing 4-0 at home, until the bottom of the fourth. Yuli Gurriel hit a ground ball up the middle to put Houston on the board, 4-1.

From there, it was all Astros.

In the bottom of the sixth inning, Gurriel pops a base hit into leftfield, putting the Astros up 4-3.

Bottom of the ninth, the bases are loaded. Houston was down 4-3. Alex Bregman stepped to bat and blasted one to left centerfield.  It was the final nail in Tampa’s coffin.

Bregman’s walk-off, two-run double gave the Astros their 12th straight win this season. The team’s Twitter account was all for it.

THE STREAK IS ALIVE! BREGMAN WALKS IT OFF! 12 STRAIGHT! #ASTROSWIN 5-4! pic.twitter.com/LhkoJi1SrP

Bregman said they’re really just out there having a good time.

Astros Manager, A.J. Hinch, had a little to say about how the game played out for his team.

The four-run deficit was the largest Houston has overcome all season.

The Rays will look to take Game 2 of the series at Minute Maid Park in Houston tonight at 8:10 p.m.

Camille Woodhouse is a Sports and Media student at the University of Florida College of Journalism and Communications. In the past, she has covered the Atlanta Falcons and Florida Gators football for various sports news outlets. She is an Atlanta native and a fan of football.
@CJW_SportsRadio
Previous CWS Preview: Florida Faces Texas with Season on the Line
Next A Florida Baseball Father’s Support Never Stops