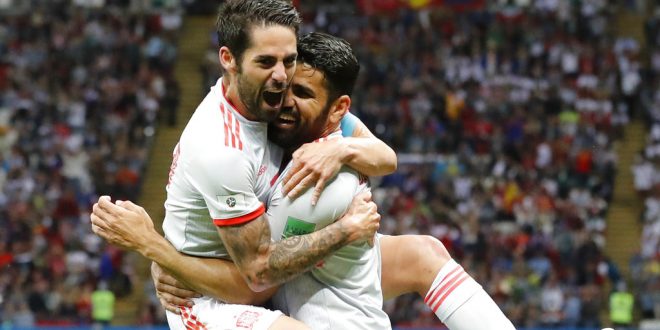 Spain's Diego Costa, right, celebrates with his teammate Isco after scoring his side's opening goal during the group B match between Iran and Spain at the 2018 soccer World Cup in the Kazan Arena in Kazan, Russia, Wednesday, June 20, 2018. (AP Photo/Frank Augstein)

World Cup roundup: Spain up, Morocco out and Uruguay in

Matchday two of the 2018 FIFA World Cup’s group stages rolled by this Wednesday; and while it may not have been the most high-scoring, the day’s slate of games proved vital for a number of teams.

Before noon, Morocco was sent home. Hours later, Uruguay moved on. And to cap it all off, one of the competition’s favorites slogged through its match, narrowly clinching a win.

Want more World Cup stories? Read on for a recap of the day’s action.

It hasn’t been a week, and the World Cup has already claimed its first victims.

Or, rather, Cristiano Ronaldo did.

A mere four minutes into Group B’s second matchday, the Portuguese star found twine, heading in a corner from close range to put A Seleção das Quinas up 1-0 over Morocco. The goal — Ronaldo’s fourth of the group stage — made the 33-year-old forward the top European international goal scorer in history, and proved decisive in Portugal’s ultimate victory.

The Atlas Lions outpossessed (55 to 45 percent) and outshot (15 shots to 10) the Portuguese, but failed to put one away. Poor shooting form continued to haunt Hervé Renard’s men: The Moroccans also dropped their group opener to Iran by the same scoreline, despite once again outperforming their opposition.

Following their defeat, the Moroccan national team — unjustly — became the first to be eliminated from this year’s tournament. Portugal, on the other hand, consolidated its place in one of Group B’s qualifying spots. All they need is a draw against Iran to advance.

Following their 5-0 demolition at the hands of the host Russians, Saudi Arabia needed a decisive result against Uruguay. Their slim hopes for advancement depended on it.

Within 23 minutes, that dream vanished.

Uruguayan winger Carlos Sanchez lofted a corner kick into the box and, after goalkeeper Mohammed Al-Owais whiffed on his punch attempt, all-time leading scorer Luis Suarez tapped into an open net for the game’s only goal.

In addition to eliminating them from the competition, the game extended The Green Falcons’ World Cup drought to 12 games without a win. Uruguay, however, booked its ticket to the round of 16.

Whether or not they draw the winners of Group B, though, depends on their final tilt against Russia.

Winners of the 2010 World Cup, Spain were expected to dominate. After all, Iran only scraped past Morocco courtesy of a stoppage time own-goal.

If only it were that easy.

Carlos Queiroz’s men set out to spoil the Spanish attack, parking the bus for the majority of the first half. Initially, it worked: Despite ceding 80 percent of the ball through the first 45 minutes, the Iranians repelled Spain’s attacking efforts.

Between wasting time and defending with 11 men, Iran nearly carved out an unlikely lead in the 53rd minute when Karim Ansarifard lashed a shot into the side netting of David De Gea’s goal. But seconds later, Spain lucked out: After controlling a pass from Andres Iniesta in the box, Diego Costa turned goalward. Ramin Rezaeian poked the ball off the forward’s foot, into his shin, and past netminder Alireza Beiranvand for the only goal of the match.

Forced to abandon their reductive style of play, Iran thought had they equalized off a free kick. However, after further review, the Video Assistant Referee waved off the goal, declaring scorer Saeid Ezatolahi offside. Both sides generated chances after that, but Spain dominated possession and saw its nervy win through.

The triumph puts Spain atop Group B, tied with Portugal on points. Barring a loss and an Iranian victory on matchday three, La Furia Roja is all but sure to play in the knockout rounds. 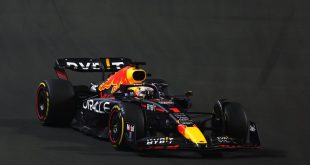 Red Bull holds off Ferrari. Mercedes falls behind. As the second weekend of racing in …