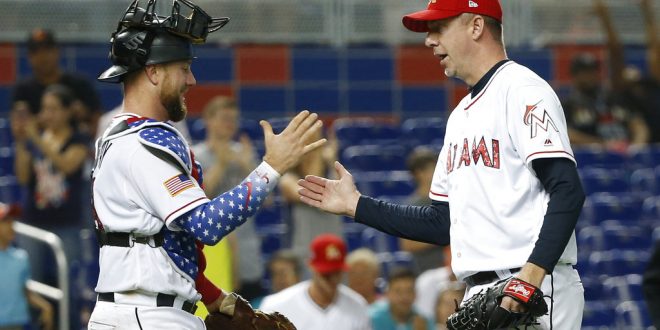 After a three-game series in South Beach, the Miami Marlins overcame the Tampa Bay Rays two games to one in a mid-week series. The Rays were able to best the Marlins on Tuesday, leading to payback for Miami on the Fourth of July.

The third meeting between the in-state rivals would take a while to get going. The first five innings, as well as the top of the sixth, were very quiet, featuring only five total hits and zero errors.

The action would pick up in the bottom of the sixth, when JT Riddle tripled deep into center. The play would follow a single from Starlin Castro, who took advantage of the triple, putting Miami up on Tampa Bay 1-0.

JT Riddle triples home a run! And we lead!#JuntosMiami pic.twitter.com/qQWg7JFLf6

The Marlins would continue the scoring output in the bottom of the sixth, when JB Shuck would ground to the shortstop, resulting in a Castro score for Miami, extending the lead to 2-0.

The seventh and eighth innings would be two quiet innings for both sides, up until Riddle took the mound to bat.

After a strikeout of Castro by Tampa Bay pitcher Hunter Wood, Riddle would swing for a 353-foot home run, extending the score to 3-0 in favor of the Miami Marlins.

.@_Riddler_10 is having himself a DAY! His homer puts us up 3-0.#JuntosMiami pic.twitter.com/NdkBMyNLU5

The Rays were unable to answer back in the top of the ninth, resulting in the Marlins getting the win on Independence Day, as well as the series win at home. While the Rays now have an off-day, the Marlins have no room for rest.

After beating the Rays in this series, the Marlins now look ahead to a road trip. They will travel to Washington for a four-game series against the Nationals starting Thursday night. Meanwhile, the Rays will have an off-day on Thursday. They next travel to New York for a three-game stretch against the Mets, beginning on Friday night.

Finally, stick with ESPN 98.1 FM – 850 AM WRUF for coverage of the Rays’ series against New York starting Friday night at 6:30.