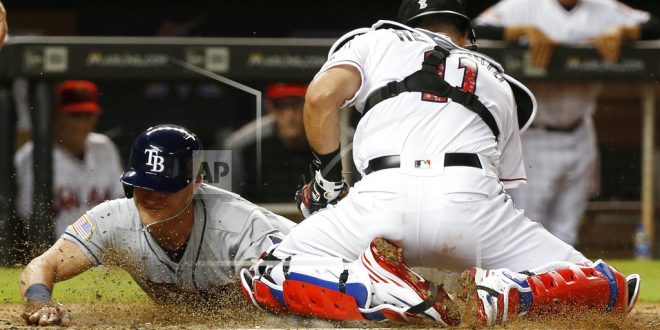 Tampa Bay Rays' Jake Bauers slides past Miami Marlins catcher J.T. Realmuto (11) to score on a double by C.J. Cron during the ninth inning of a baseball game, Monday, July 2, 2018, in Miami. The Marlins defeated the Rays 3-2 in 10 innings. (AP Photo/Wilfredo Lee)

The Tampa Bay Rays will take on the Miami Marlins in Game 2 of the Citrus Series.

Marlins Cool Off the Hot Rays

Miguel Rojas put the Marlins on the board in the bottom of the second after second baseman Starlin Castro hit a double allowing Rojas to score. The Rays clapped back in the 4th when Adeiny Hechavarría hit sacrifice fly to the right letting shortstop Daniel Robertson score.

Marlin’s catcher J.T. Realmuto homered in the fifth inning putting the Marlins back up 2-1. The Rays’ first baseman C.J. Cron tied the game in the ninth with a two-out RBI double allowing Jake Bauers to score. In the bottom of the 10th, Yadiel Rivera finished the game with an infield single to third sending Brian Anderson home.

Though the Marlins cooled off the Rays after a 8-1 home stand, the Rays aren’t backing down just yet.

Third Baseman Matt Duffy believes the Rays are finding some identity. In an interview after the game Duffy said “We’re starting to believe we can play with anybody. And we’re starting to realize that in order to do that, we’re going to have to play nine innings of focused baseball. Today happened to be 10. It’s a frustrating loss, especially after coming back in the ninth. But we think we can play with anybody.”

The Rays will play the Marlins at 7:10 pm at Marlins Park. Ryan Yarborough will be starting pitcher for the Rays and Trevor Richards will start for the Marlins.

MLB Cracking Down on Foreign Substances