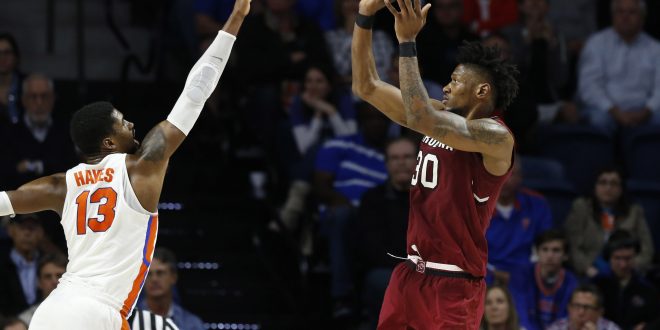 South Carolina Basketball: Where Will They Land this Season?

The South Carolina Gamecocks haven’t had much luck on the basketball front. This past season hopes were high for the Gamecocks as they came off a Final Four run, but by the end of it all, it was real tough on the team. They ended up with a 17-16 record, 7-11 in the SEC, and absolutely no post season action. Now looking ahead to the next season, the Gamecocks will be trying hard to turn their luck around.

One big thing to talk about with the Gamecocks (and a little bit of good news they had) was the fact that Chris Silva decided coming back for his senior season. He was a big part of the team last year leading the Gamecocks in points per game (14.3), rebounds (8), blocks (1.4), and the stat everyone likes to mention: attempted free throws (283). You can probably expect him to be finding different ways to get to the line this season too.

It’s not just Chris Silva in the lineup. The Gamecocks have more firepower coming back to their roster as well. Joining Silva on the court will be Felipe Haase, Hassani Gravett, Jason Cudd, Justin Manaya and Maik Kotsar. Coach Frank Martin says he expects great things from these guys who will get a lot more playing time this season.

However, we can’t talk about South Carolina’s upcoming season without talking about the loss of Brian Bowen. Back in May, Bowen was ruled ineligible to play by the NCAA based on the alleged benefits that his family got during his time at Louisville. Bowen then declared for the draft on May 30th, but then took his name out twelve days later. Bad news for Gamecocks fans because the South Carolina native definitely won’t be donning the garnet and black.

To be honest, this season won’t be a walk in the park for the Gamecocks. The State Newspaper says it could be the hardest schedule Martin’s faced in his seven years at the school. Looking at CBSSports.com “way-too-early” pre-season rankings, Kentucky is at No. 1, Tennessee is No. 4, , Virginia (7), Auburn (10), Mississippi State (15), LSU (19), Michigan (21) and Clemson (24). Every single one of those teams is an opponent of the Gamecocks this season, including the runner up for this year’s NCAA basketball tournament.

Coach Martin says good players is what makes the SEC so competitive and he’s not shying away from that fact.

South Carolina will host Stony Brook on Nov. 9th and Norfolk state on Nov. 13. Currently, those are the first games announced for their season.