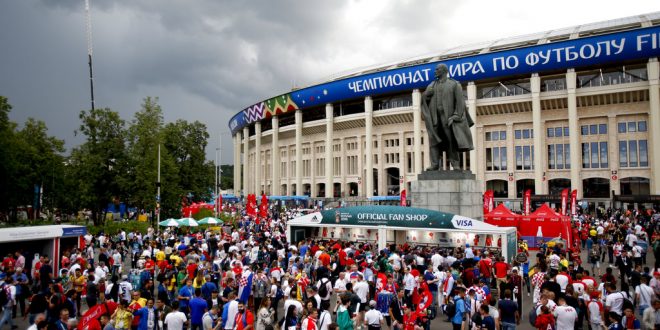 Soccer fans walk near a statue of Lenin before the semifinal match between Croatia and England at the 2018 soccer World Cup in the Luzhniki Stadium in, Moscow, Russia, Wednesday, July 11, 2018. (AP Photo/Rebecca Blackwell)

The last game but certainly not the least. The 64th of 64 games, the most important one of them all.

Over a billion eyes will tune into the action Sunday evening taking place at the Luzhniki Stadium in Moscow, where a captivating FIFA World Cup will culminate with two worthy finalists taking the pitch with history on the line: France and Croatia.

This all-European final wasn’t expected at the onset of the tournament. After a month of play though, the two standout teams have found their way to this final, with 90 minutes (or more) standing between them and ultimate glory.

France find themselves in their third ever final, all coming within the past six World Cups. They won their only ever title at home in 1998, defeating a star-studded Brazil thanks to the heroics of Zinedine Zidane. Their second appearance went much differently. They lost to Italy in penalties in a match remembered as much for the result as for one of the most shocking moments in tournament history: the same Zidane who was the hero in ’98, became the villain after headbutting Marco Materazzi and earning a red card in extra time.

Croatia meanwhile have already made history, reaching their first ever World Cup final as an independent nation. Ironically enough, their previous best finish also came at France ’98, where they earned third place after losing to the French in the semifinals. In reaching the Russia 2018 final, they’ve become the second smallest nation ever to reach a final, only behind Uruguay.

The past semifinals showed why these two midfields are so pivotal to their teams’ success.

Kante tracks, covers, and destroys on repeat for entire matches. He provides defensive cover in midfield at a rate unmatched in world football. What he lacks in height (5’6″) he makes up for in heart, stamina, and intelligence. He can go from the attack to securing a crucial tackle in a matter of seconds. He’s a big part of why France have only conceded in two games, with three of them being against Argentina.

His partner in crime, Pogba, has been the prototypical box-to-box man. While his defensive workrate has been a pleasant surprise at this tournament, he’s been liberated slightly more by Didier Deschamps in attacking sense. He’s been a lynchpin for France going forward, bringing the ball up from deep in midfield and springing counters with surging runs or direct passes to Antoine Griezmann and Kylian Mbappe.

Opposite them will line up an older, but just as impressive duo in Luka Modric and Ivan Rakitic. The two La Liga stars, of Real Madrid and Barcelona respectively, are more attack minded than their French counterparts. While they started the tournament in a similar double pivot, manager Zlatko Dalic has freed them up a bit by moving to a midfield three. Marcelo Brozovic provides them cover as an out-and-out defensive midfielder. This allows Rakitic and Modric to focus more on creating, without having to sit as deep to defend as well.

This is especially true for Modric. As of now, he’s sure to be the leader for the Golden Ball as the tournament’s best player, and it’s easy to see why. He’s been an engine in the Croatian midfield, controlling tempo, picking out passes, providing support, and providing leadership in three consecutive knockout games that have gone to extra time.

Against France, the focus for Modric and Rakitic should be on winning the ball in close to the midfield line, and spring the ball out wide quickly to wingers Ante Rebic and Ivan Perisic. If Croatia can catch France on the counter and move the ball wide, it’ll force the French to open up horizontally, opening up space back in the center of the pitch for Mandzukic to run onto crosses, space to cut in for shots, or even cutbacks for late runs from midfield.

A defining feature of both teams is just how pivotal their full backs, especially their right backs, are to their attacks.

Benjamin Pavard plays his club football at Stuttgart in Germany, and has been a breakout player in this tournament for France.

His forays forward on the right hand side have posed problems for defenses trying to figure out how to defend him and Mbappe on the right wing. Pavard’s overlaps provide crossing opportunities for France, while also giving Mbappe space to cut inside and shoot or play give-and-go’s with Griezmann and Olivier Giroud. That’s not to mention his screamer against Argentina, one of the goals of the tournament.

For Croatia, Atletico Madrid right-back Sime Vrsaljko plays much the same role as Pavard does for France. While obviously being tasked with defensive responsibilities against the opposing team’s winger, he flies forward to support Rebic on the right side. His crossing is a powerful weapon for a Croatia team that loves to whip in crosses in the box, especially when frustrated in and around the box. His cross helped Croatia tie the game up against England once they had started to impose their will on the match.

Ivan Perišić beats Kyle Walker to the ball to pull Croatia level with 20 minutes left in the game. pic.twitter.com/O0xaQRULT7

Vrsaljko might have more freedom to push than Pavard though, as France’s left midfielder, likely Matuidi, is more of a central midfielder and thus won’t threaten Vrsaljko the way Pavard will have to worry about Perisic’s strength and speed on the wing.

It’s been a story line this entire tournament, and it’s been an integral part of the game since its inception.

Almost 60 at this World Cup have been scored off set pieces, and they’re importance showed once again in France’s 1-0 win over Belgium in the semifinals. In tightly contested games where neither team can seem to break through, set pieces can often be the difference maker.

It’s an area that Croatia will especially be looking to tighten up. They’ve allowed dead-ball goals in each of their three knockout stage games. Denmark scored on a loose ball after a throw in, Russia tied the game 2-2 in extra time after a Mario Fernandes header from a free kick, and Kieran Trippier’s free kick curler gave England the lead inside of five minutes in the semifinals.

The last two World Cup finals have been tight games that finished 1-0 in extra time. A tight game on Sunday could increase the importance of set pieces in a tournament in which they’ve already proven invaluable.

Native New Englander. Follow me on Twitter: @jonacosta_10
@jonacosta_10
Previous Rays Look to Bounce Back After Winning Streak Snapped
Next South Carolina Basketball: Where Will They Land this Season?