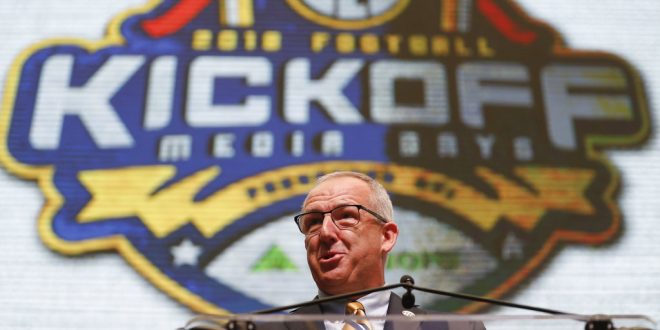 For four days, college football will dominate downtown Atlanta; and for the first time in the event’s history, Southeastern Conference commissioner Greg Sankey took to the stage at the College Football Hall of Fame to kick off the SEC’s media days.

Sankey — the conference’s leader since 2015 — spoke for roughly forty minutes on Monday, offering a statement, fielding questions from reporters and touching on subjects ranging from the conference’s scheduling format to the dilemmas posed by the legalization of sports betting.

Here are a couple of highlights from the commissioner’s opening press conference.

The SEC’s 6-1-1 scheduling model — where teams play each school in their division, in addition to one designated and one rotating rival from the other division — has long been a point of contention for the conference’s fans.

Sankey quickly dashed any hopes of a tweak to the system.

Those of you waiting for nine-game SEC FB Schedule are going to have to wait a while longer. Commissioner @GregSankey said he presently does not "anticipate a change" in the SEC's scheduling philosophy. Why? It works. "The facts speak for themselves."

First adopted in 2012, the 6-1-1 format underwent a “year-long” review in 2014. And while the conference stipulated the addition of a ninth game against an Autonomy Five conference opponent in 2016, Sankey said that the current scheduling method “was the clear preference of the SEC’s member institutions.”

The commissioner also pointed to some statistics that seemingly supported his claims: For one, the SEC is the only conference to have at least ten teams qualify for Bowl games over four consecutive seasons, a stretch that ran from 2013 to 2016.

“Our success as a league should not be attributed simply to our scheduling philosophy,” Sankey added, “but year after year, our best teams have produced the best team in the country.”

Earlier this year, in Murphy vs. National Collegiate Athletic Association, the United States Supreme Court ruled to strike down a ban on sports gambling. What initially began as a legal battle in New Jersey ultimately set a precedent for leagues nationwide.

However, the commissioner — in his words — is read. According to Sankey, the SEC has been monitoring the situation and “(having) communication … and learning with those who work in legalized sports betting” since 2011.

Greg Sankey on adjusting SEC college football to exist with legalized gambling laws: "We have one opportunity to get it right."

In light of the ruling, Sankey alluded to the creation of a conference-wide injury report detailing player availability. However, The Advocate’s Scott Rabalais noted that the commissioner was doubtful about the measure’s implementation during the 2018 season.

Additionally, the same article said that Sankey entertained the idea of subscribing to an analytic service to better vet whether unusual occurrences in games relate to the betting line.

“For us, the integrity of our games is of the utmost importance,” Sankey said. “Identifying the proper approach should be the priority, not haste.”