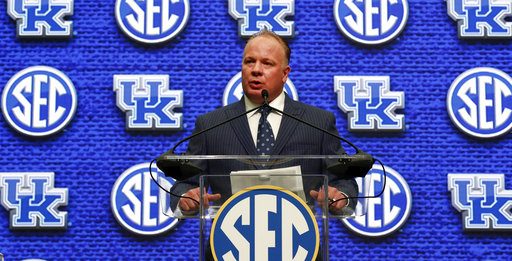 As SEC Media Days continue, we continue to hear from all of the SEC college football teams for the upcoming season, including the University of Kentucky.

The Wildcats have had many up and downs throughout their football program but look to have a better one this upcoming season. They made school history by making it to two consecutive bowl games, with the latest one being their 5th time in school history.

“Change in Expectations” is what the head coach looks forward to for this upcoming season.

The head coach was accompanied by players Josh Allen, Benny Snell, and CJ Conrad as returning players who will have a big impact this upcoming season.

The biggest thing that he is looking forward to this upcoming season is the change and experience from returning players.

Running back Benny Snell Jr. is a big piece on this team who brings many different leadership roles on and off the field.

Mark Stoops says he is one of the main priorities on this Kentucky team because he brings different attributes to the team. Snell comes in to the 2018 season having had over 1,000 yards in his first 2 years at Kentucky

Josh Allen, an outside linebacker, came in as a 2-star recruit at 200 pounds and now is 260 solid and a projected 1st round pick. He is an example of development and will have a big season for the Wildcats.

Questions were brought out about Kentucky and Florida’s rivalry. Over the years Florida has beaten Kentucky 31 times straight.

Coach Stoops says getting over that hump is a must, but is not really concerned.

With the season only a month away from kickoff there are many obstacles that they are going to go through, but with head coach Mark Stoops change in expectations, Kentucky should be on the radar watch.