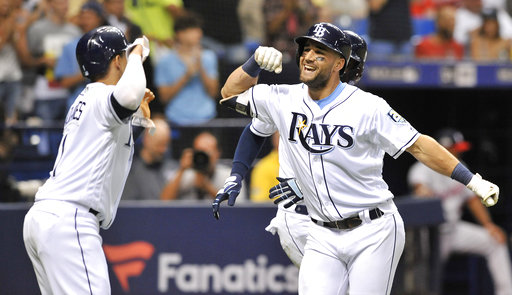 Rays Win Big Thanks To A Perfect Start By Eovaldi

After a rough start to a short road trip, losing 2 of 3 in Miami during the week, the Rays took the rubber game on Sunday against the Mets to end the trip 3-3. Pitcher Nathan Eovaldi gave the Rays the perfect start.

The Rays bats came alive early as C.J. Cron got the day going with a 3-run blast deep to left field in the first inning. That was more than enough for Rays pitcher Nathan Eovaldi as he went on to take a perfect game into the 7th inning, finishing the day with 7.0 IP, 0 ER, 9 K, and 0 BB.

In the 3rd, the Rays got back on the board thanks to an RBI single by Daniel Robertson that scored Jake Bauers, and an RBI double by Mallex Smith that scored Robertson. Adeiny Hechavarria added another run in the 5th when he scored on an infield single by Eovaldi giving the Rays a 6-0 lead.

Bauers continued his contribution in the 6th when he belted a 401-foot blast to right field for his 3rd homer of the year.

The Rays added a couple of runs in the 8th when Joey Wendle took Paul Sewald deep for his 3rd homer of the year, and Robertson grounded into a fielder’s choice to score Matt Duffy.

Pitcher Andrew Kittredge came on in the 8th for the Rays going the rest of the distance and sealing the series victory.

The Rays travel back home to begin a 3-game set with the Detroit Tigers. Chris Archer is making his return from the DL for the Rays and will square off against Francisco Liriano. Archer is 3-4 with a 4.24 era and Liriano is 3-5 with a 4.03 era.