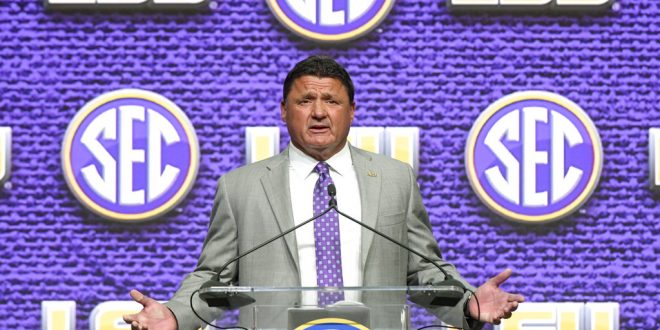 Following a rocky 2017 season, Ed Orgeron and the LSU Tigers feel confident going into the 2018 season.

The Tigers are coming off a 9-4 2017 season that saw the Tigers beat SEC West division champions Auburn and lose to Troy.

The biggest question mark for the Tigers heading into the season is at the quarterback spot. LSU has four viable options at the position and Orgeron said that the decision will be made during fall camp.

The running back position is up for grabs as well with the departure of Derrius Guice to the NFL. Orgeron said that he feels the Tigers have two or three outstanding running backs in Clyde Edwards-Helaire and Nick Brossette.

Orgeron said he is more comfortable in the LSU program after taking over head coaching duties during the 2016 season. He said that his coaching staff is more equipped to compete at the highest level, having hired five more analysts to aid his staff.

The Tigers will be looking to junior linebacker Devin White for leadership. White garnered high praise from Orgeron after he emerged as a vocal leader in the LSU locker room following their lose to Troy. White was named the team MVP in 2017 and recorded 133 tackles.

Rivalry with the Gators

Orgeron said that the win last year in Gainesville turned the season around for the Tigers. LSU won 17-16 after a missed extra point allowed the Tigers to escape with a win.

LSU kicks off the season on September 2 against Miami at AT&T Stadium in Arlington, Texas. The Tigers take on the Gators on October 6 in Gainesville.