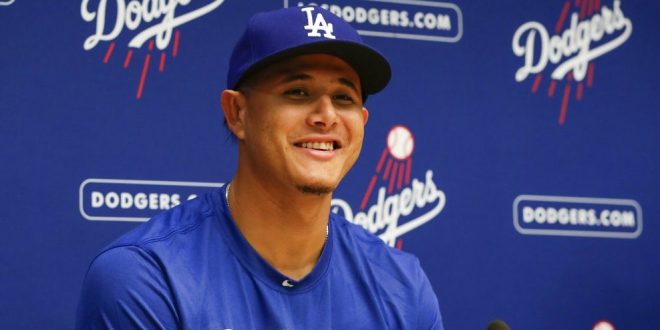 Manny Machado Off to Red-Hot Start with Dodgers

Manny Machado has gotten off to a flying start for his new team, the Los Angeles Dodgers. In three games, Machado has batted .385 and has an on-base percentage of .467.

Recently, Machado joined the Dodgers via a trade from the Orioles on Wednesday night. In return for the All-Star short stop, the Orioles received the following prospects, according to ESPN: outfielder Yusniel Diaz, third basemen Rylan Bannon and Breyvic Valera, and right-handers Dean Kremer and Zach Pop.

On Friday, Machado shared his love for the Orioles’ organization. However, he also said that he looks forward to his future with the Dodgers.

Career with the Orioles

Machado began his MLB career with the Orioles in 2012 at the age of 19. In the following year, Machado was selected to the All-Star team. During his eight-year tenure with Baltimore, Machado hit for a .283 batting average with 162 home runs and 977 total hits in 860 games.

However, this season stood out from the rest for Machado at the plate, as he hit for .315 with 24 homers and 65 RBI. A plethora of clubs showed interest, but ultimately the World Series runners-up landed the 26-year-old star.

Machado’s move to L.A. meant leaving behind friends and family; something he found to be one of the most challenging parts of the trade. However, he also stated that he is blessed and ready to take on the new challenge.

On his debut against the Milwaukee Brewers, Machado reached base on four occasions. This came from two hits and two walks on five total plate appearances.

Manny Machado is the first player to reach base at least 4 times in his Dodgers debut since Rafael Furcal on April 3, 2006. (@EliasSports) pic.twitter.com/WLhMlzuVOm

Secondly, he went 1-5 as the Dodgers fell to the Brewers. Lastly, in his third and most recent game, Machado went 2-5.

The Dodgers will begin a three-game away series against the Philadelphia Phillies on Monday night. Additionally, Machado expects to start the game.