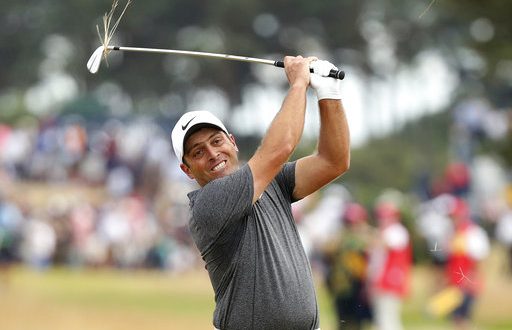 Francesco Molinari of Italy plays out of the rough on the 9th fairway during the final round for the 147th British Open Golf championships in Carnoustie, Scotland, Sunday, July 22, 2018. (AP Photo/Peter Morrison)

The Open Championship in Carnoustie, Scotland, finished yesterday. With a field of big names in the hunt for the title, a lesser-known name made his rise to the top of the pack.

Three tournaments, three consecutive top-two finishes for Francesco Molinari. After winning the Quicken Loans National and finishing runner-up at the John Deere Classic, the Italian won The Open with a score of 8-under.

In the fourth round, most golfers at the tournament shot even or worse. Instead, Molinari shot the third-best round of the day at 2-under. Following the champion were four golfers tied at 6-under: Justin Rose, Rory McIlroy, Kevin Kisner and Xander Schauffele. With his first major victory, Molinari became the first Italian to ever win a major.

A big takeaway from this weekend’s tournament was the continued emergence of American golfers. This season, U.S. golfers have been excellent. Before the Open, Uncle Sam laid claim to all four majors (five, if you include Webb Simpson at TPC Sawgrass), the No. 1 player in the world (Dustin Johnson) and the Presidents Cup. The Open was no different. Of the top-11 on the leaderboard, seven were from the U.S.

Big Names Falter Down the Stretch

What do Tiger Woods, Jordan Spieth and McIlroy all have in common? They’re all big names that failed to take advantage of their position in the last nine holes.

Unfortunately for Tiger, his downfall was particularly troubling. After putting himself in great position with a 2-under front nine, he double-bogeyed hole 11 and bogeyed hole 12. It seemed like he never found his momentum after that and rode himself out of contention.

Spieth entered the day at 9-under, but got eaten up by the course as he went 5-over on the day. He cited his lack of a putting game as a central issue in the round.

McIlroy had the best chance of the three going into the last four holes after an eagle on hole 14. The Northern Ireland-native, however, couldn’t get within more than two strokes of Molinari and settled for a tie in second.

Smaller Names Show Out, Too

It wasn’t all about the big fish at the Open Championship. Some lesser-known guys finished in the top-10, as well: Schauffele, Eddie Pepperell, Tony Finau and Patrick Cantlay just to name a few.

Chris O'Brien is a rising sophomore at the University of Florida. He aspires to be an on-air sports anchor someday.
Previous Miami Marlins Best Tampa Bay Rays in All-Florida Weekend Series
Next Manny Machado Off to Red-Hot Start with Dodgers