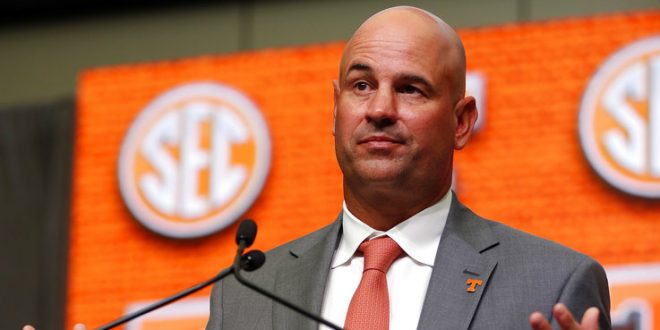 The Tennessee Volunteers had a rocky season last year, but that’s the least of Jeremy Pruitt’s concerns.

Pruitt made it known at SEC Media Days last week that he is only focused on what has happened with his program over the past six months.

The first-year head coach discussed his quarterback and running back situations, along with demonstrating pride for his new school.

Here is what Pruitt had to say at the podium:

At the moment, Tennessee does not have a definitive starting quarterback. Pruitt will have four options to consider for their opening game against West Virginia: Jarrett Guarantano, J.T. Shrout, Will McBride and Stanford transfer Keller Chryst.

All four of these players will have a chance to compete, but Pruitt said that he wants to make a decision soon to establish a rhythm.

Another position that Pruitt does not have a definitive starter for is at running back. According to the former Alabama defensive coordinator, the Volunteers will be looking at a running back by committee approach.

On a side note, Pruitt said that sophomore offensive lineman Trey Smith will be back for the fall. Smith could not go through spring practice due to a medical condition.

Pride for his new school

One of the key themes in Pruitt’s opening monologue was his excitement about being at Tennessee.

Although Pruitt had been at three schools since 2013 prior to accepting the Volunteers head coaching position, he made it known that he is committed to Tennessee.

The Power T stands for a lot of things. It represents POWER.

Pruitt also said that Tennessee’s fan base’s presence is visible throughout the southeast. He acknowledged that both the fans and his team want the same goal: success at the school.

While Alabama is still the powerhouse of the SEC, Pruitt said that he is working to make the Volunteers a championship contending program.