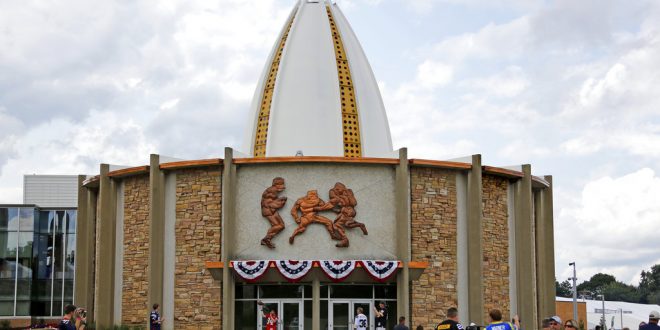 FILE - This is an Aug. 5, 2017, file photo showing football fans tossing footballs on the lawn outside the Pro Football Hall of Fame in Canton, Ohio. Despite his decision to not attend Saturday's Pro Football Hall of Fame induction ceremonies, Terrell Owens will be "honored" by the hall for his NFL career. Hall President David Baker tells The Associated Press on Monday, July 30, 2018, that the Canton, Ohio, shrine's mission statement begins with the goal "to honor the heroes of the game."(AP Photo/Gene J. Puskar, File)

Immortality is drawing near for eight former NFL players. The Pro Football Hall of Fame will welcome the Class of 2018, featuring three first-ballot Hall of Famers: Ray Lewis, Brian Urlacher and Randy Moss. .

Starting off with the former Miami Hurricane, two-time Super Bowl Champion Ray Lewis leaves behind an incredible resume in the sport, as well as one of the most iconic pre-game traditions in history.

For 17 seasons, Lewis made his mark on the Baltimore Ravens, getting drafted in 1996 at No. 26 overall. A two-time NFL Defensive Player of the Year in 2000 and 2003, the Bartow, Florida-native would lead the Ravens to a Super Bowl title in 2001, and capped off his career in 2013 with a victory in the big game against the San Francisco 49ers.

Bear Down in the Hall

Secondly, the Chicago Bears also have a first-ballot Hall of Famer in Chicago legend Brian Urlacher.

WHAT A MOMENT. #Congrats54 pic.twitter.com/Gc8mOR84J9

Urlacher spent 182 games across 13 seasons with the Bears. In his tenure at the windy city, No. 54 had an immediate impact on the team. Selected by Chicago at No. 9 overall in the 2000 NFL Draft, his rookie season saw eight sacks and two interceptions. The breakout season would result in NFL Defensive Player of the Year honors.

Recording four tackles and two blocked passes, Urlacher would be an integral part of the Bears’ NFC Championship in 2007 against the Seattle Seahawks in OT. Securing a berth in the Super Bowl that year, the eight-time Pro Bowler will take his rightful place in history with a gold jacket on Saturday.

“You Got Mossed” Into the Hall

Rounding out the group is a former Viking, 49er and Patriot: Randy Moss. Sitting at second-most touchdown catches behind Jerry Rice at 156, Moss has an argument for one of, if not the best, receiver to ever play the game.

Playing 218 games across 14 seasons, he would start in Minnesota as the No. 21 pick in the 1998 NFL Draft. His rookie season will forever be history. Securing the single-season touchdown record for a rookie in 1998 with 17. He would repeat the feat in 2007, catching 23 touchdown passes.

Arguably one of the best to never win a Super Bowl ring in his illustrious career, a Hall of Fame nod is definitely vindication for Moss, who more than earns his place among the greatest players to ever play the game of football.

Arguably the most polarizing player in this year’s class, former 49er, Bill, Bengal, Cowboy and Eagle Terrell Owens is making headlines for his Hall of Fame weekend plans. The six-time Pro Bowler will be celebrating his induction into the Hall at the University of Tennessee – Chattanooga.

In response to Owens’ plans, which is in part due to not making the Hall on the first ballot, the Hall of Fame committee will refuse to acknowledge Owens individually at the ceremony. It will be hard to say that Owens has not earned his spot in the Hall. Playing 219 games in 16 seasons, the third-round pick in 1996 went to the Pro Bowl six times in his career

The Rest of the Class and Broadcast Information

The rest of the Hall of Fame Class of 2018 will include:

The 2018 Pro Football Hall of Fame Induction Ceremony takes place on Saturday at 7 p.m. The event takes place in Canton, Ohio, and will be live on the NFL Network, as well as ESPN.