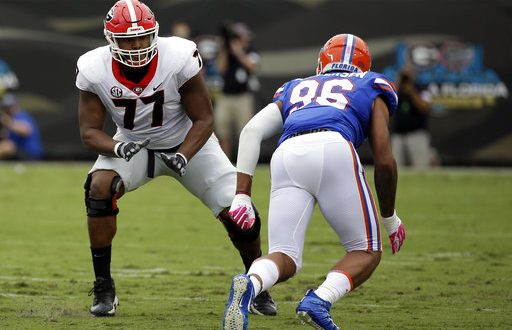 In a time when the Florida Gators‘ struggles on offense are so highly discussed, it can be easy to overlook Florida’s dip on defense last season.

Now first-year Gators defensive coordinator, Todd Grantham, is tasked with helping Dan Mullen provide a jolt to a defense that could be seen as a sleeping giant.

The Swamp is at its most intimidating when it’s a tough place to play for opposing offenses. But they slipped into the middle of the pack in the SEC in terms of total defense last season.

They often had trouble keeping games close — albeit the Gators’ offense didn’t provide consistent help either.

Grantham’s switch to his preferred 3-4 defense was one of the big talking points at Florida’s media day on Thursday.

What the Scheme Change Means

Grantham spoke about the effect the scheme change might have on a player like senior defensive end CeCe Jefferson.

One of the Gators’ most experienced players on defense will now have to play more as an outside linebacker and go into a bit of pass coverage.

What’s telling is that Grantham said that CeCe, like the rest of the players, has embraced the changes Mullen and his coordinators are implementing.

“When you look at his body type he’s made to be more of a linebacker at the next level,” Grantham said. “With his continued development, improvement and his techniques, we fully expect him to have a big year.”

On the outside, Grantham said that the Gators will go with a zone defense on most plays. The Gators seem to have the personnel to play the tight, suffocating defense that Grantham wants.

He had special praise for a player he considers to be one of his leaders on defense, junior defensive back Chauncey Gardner-Johnson.

Gardner-Johnson will be another familiar face that will be asked to different things now. He’ll move between safety and nickelback, but Grantham is sure that he’s got the talent to do the job.

“We continue to build competitive toughness and want our defense to embrace the identity we create through aggression and strength. If we can embrace that identity we will get stops and create turnovers to help us win games.” — @CoachTGrantham #GatorsMediaDay #GatorsCamp pic.twitter.com/vgFN22BprV

How Will Grantham Choose to Pressure the Quarterback?

Grantham is planning to bring “heat” on opposing quarterbacks. Excitingly enough, he said that the Gators plan to bring pressure in a variety of ways this season.

Indeed the new 3-4 scheme will help the Gators show off their athleticism at different positions.

“The first thing you want to do is not let people run the ball,” he said. “Once you make them one dimensional it dictates a little bit better for how you can play.”

It’s something that defenses did to the Gators’ offense frequently last season. The absence of a consistent running game put a lot of pressure on Feleipe Franks and the receivers to come up with too many big plays.

Grantham proved himself to be a worthy assistant to Mullen at Mississippi State. In just one season there, he helped improve the Bulldogs’ defense tremendously. They went from second-to-last in opponents points per game in 2016 to just ahead of the Gators in 2017.

The Gator Nation will now be hoping Grantham’s fresh batch of ideas can have a similar effect at Florida.

A return to top-notch defense in the SEC will definitely make it much easier for the Gators to reach their goals in 2018.