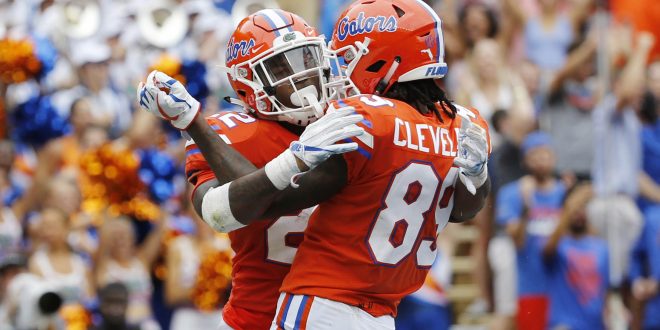 The wide receiver corp for the 2018 Florida Gators football team is arguably one of the deepest positions on the team.

Receivers Coach Billy Gonzalez is taking over the position group this season. He came from Mississippi State with Dan Mullen and will serve as the co-offensive coordinator as well.

Gonzalez said he is instilling a mindset of hard work and doing the “little things” right into his players. He said he is emphasizing blocking in practice and that if a player won’t block, they won’t play.

He said that in a great game a receiver will have 10 to 12 catches and that what you do on the other 70 plays is more important. Doing the dirty work on the outside will open up more pass-catching opportunities, Gonzalez said.

Ohio State transfer and former five-star prospect Trevon Grimes has been a focal point for Gonzales. He said that Grimes needs to learn how to play with the skillset he has been given.

Grims stands at six feet, five inches and is a very physical player who could have lots of success on the perimeter, Gonzalez said.

Along with Grimes, Ole Miss transfer Van Jefferson has impressed in fall camp and will be a key addition to the receiver corp.

A new offense means the struggles of trying to learn it in a short period of time. Coach Gonzalez said that getting down the formations and concepts is the most important part he is trying to teach his receivers.

Gonzalez noted the work that the players did over the summer as helpful entering fall camp. However, he said the retention rate of the playbook is something the team needs to work on.