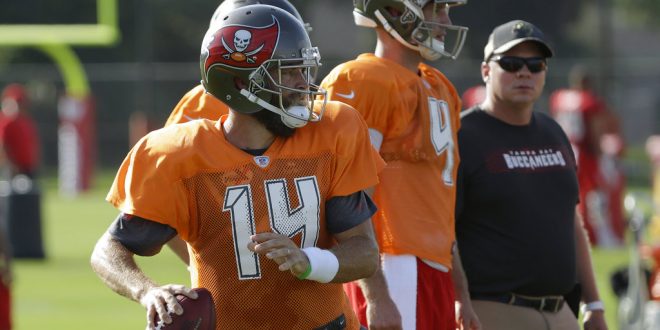 FILE - In this July 28, 2018, file photo, Tampa Bay Buccaneers quarterback Ryan Fitzpatrick (14) throws a pass during an NFL football training camp practice in Tampa, Fla. Ryan Fitzpatrick jokes that he thought he had “seen it all” during a 13-year career as a starter and backup quarterback. Now, he's preparing to lead the Buccaneers during Jameis Winston's three-game suspension for violating the NFL's personal conduct policy. (AP Photo/Chris O'Meara, File)

Bucs And Dolphins Set To Clash In Preseason Debuts

The Tampa Bay Buccaneers and Miami Dolphins will open up the preseason on Thursday night when the two teams face off at Hard Rock Stadium.

Both teams come into the new season optimistic for improvement after each having a disappointing 2017 campaign. Tampa Bay went 5-11, while Miami could only manage a 6-10 record.

Tampa Bay Buccaneers: Can Fitzpatrick fill in for Winston?

Everybody knows by now that Bucs quarterback Jameis Winston is suspended for the first three games, and many believe those first few contests could make or break the team’s season.

But not so fast: many people out of Bucs’ camp have been praising the veteran from Harvard, QB Ryan Fitzpatrick.

Fitzpatrick says he feels great physically and that his teammates have really rallied around him. Many forget that Fitzpatrick replaced Winston last year for three games, while the Florida State product had to sit out with a shoulder injury.

He’d go on to go 2-1 in those three games, proving he has the ability to manage the offense while Winston sits out.

It’s easier to see Fitzpatrick managing just fine when you look at the offensive weapons he has at his disposal. The wide receiver room is stacked with talent with the likes of Mike Evans and Desean Jackson.

The tight ends are very talented as well.

O.J Howard and Cameron Brate make up one of the better tandems in the NFL.

One name that people need to be aware of is Chris Godwin.

The second-year player out of Penn State has been electric in camp so far, and some have suggested he’s on track to take over the starting spot from veteran Desean Jackson.

Tampa Bay coach Dirk Koetter is pretty concerned about one thing heading into the preseason opener, and that’s the offensive line depth.

Bucs lineman Demar Dotson figures not to play much as he continues to recover from knee surgery. Starting right guard Caleb Benenoch has been sidelined recently because of an undisclosed injury.

Backups Leonard Wester and Cole Gardner have also been banged up in practice this week, leaving Tampa scrambling for fresh bodies.

Coach Koetter was adamant that he wouldn’t play anybody that was questionable, especially since this is the first preseason game.

The Miami Dolphins have some pieces on offense to be efficient.

Newly acquired running back Frank Gore and wide receiver Danny Amendola are a couple weapons Tannehill now has to work with.

And who could forget WR Kenny Stills or WR Devante Parker?

The bottom line is Tannehill just has to stay healthy for this team to have some success. The sixth-year quarterback from Texas A&M was unavailable all of last season after sustaining a knee injury. This forced Miami to pull the trigger on Jay Cutler who never really fit in with the Dolphins.

Will the defense miss Ndamukong Suh?

The Dolphins dealt one of their best defensive lineman to the Los Angeles Rams in free agency, and many are left wondering how much it’ll hurt the team’s defensive performance.

Well, Miami seems to be in good hands with veteran Cameron Wake and former Ram Robert Quinn on the line. Jordan Phillips has also been solid for them, overall.

Losing a player like Suh is tough, but players like the ones mentioned above should help the Dolphins not miss a beat and get after the quarterback.

It’ll be interesting to see how both defensive line units show out in the first preseason game. Both teams are dealing with revamped lines that are out to prove themselves.

Tampa Bay especially, seeing they were 32nd in the league last season in sacks. The additions of Jason Pierre-Paul, Vinny Curry and Vita Vea should help the Bucs accumulate some more sacks this season.

Also, it’ll be interesting to see how the quarterbacks perform and use their weapons.

Bucs QB Ryan Fitzpatrick is expected to get the nod on Thursday night ahead of suspended QB Jameis Winston, while Miami QB Ryan Tannehill looks to see his first game action in over a year.

Kickoff from Miami is slated for 7 p.m.

The Texas A&M head coach was the last to speak to the media Wednesday, as …