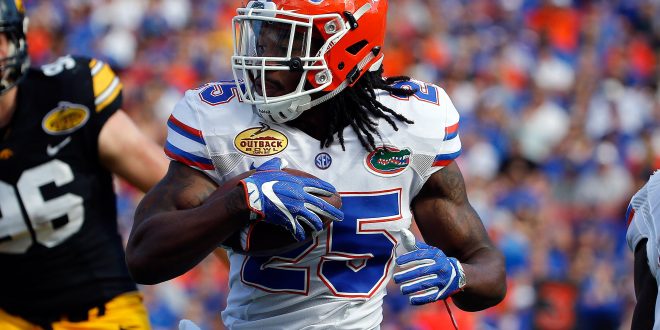 In 2016, Jordan Scarlett took over as the lead back and looked poised for a breakout 2017.

While that wasn’t to be after he missed all of 2017 when he was suspended, Scarlett is the frontrunner for the starting job this season with a chance to finally have that breakout year.

Scarlett rushed for 889 yards with six touchdowns in 2016 while averaging five yards-per-carry. He considered going to the NFL during his suspension, but never to a different program.

He was away from the team for four months after his September suspension, until Dan Mullen reinstated him in January.

Scarlett Has Had a Great Summer

He was probably the offensive MVP of the spring game, where he had 57 yards on ten carries and two touchdowns. Since then, he’s impressed throughout camp and is the frontrunner in an extremely-deep backfield.

“It definitely pushes us. Makes us take advantage of every play, every opportunity that we have. It makes you start fast and not really have to have the feel of the game to kind of get a spark,” he said.

Malik Davis broke out at the position last year, but is dealing with the knee injury that knocked him out for the year. Lamical Perine, Dameon Pierce and Adarius Lemons all have also looked good at running back this summer.

Mullen says all this depth will be used.

Mullen has stated that during a game or even leading up, if someone separates themselves from the group, he’ll get more and more carries.

It’s something that Scarlett will have to earn, probably on gameday but he will have the first crack at it. All the backs are versatile so each are factors catching the ball, something Scarlett is great at.

A New Appreciation After Last Season

Scarlett worked out everyday of his suspension waiting for it to end.

“Sometimes twice a day, because I didn’t have much to do,” Scarlett said,  “I was just staying prepared, in case I did get that call to come back.

He’s already moved up the depth chart, the first few scrimmages he didn’t start before taking the majority of the carries during the orange and blue game. Running back coach Greg Knox, says he’s trying to be a leader as the oldest player in the running back room.

There’s a clear difference in him this year. Expect him to start and get the bulk of the carries in the season opener against Charleston Southern.

He says he doesn’t take the game for granted like he did before 2017, and it’s showing already.