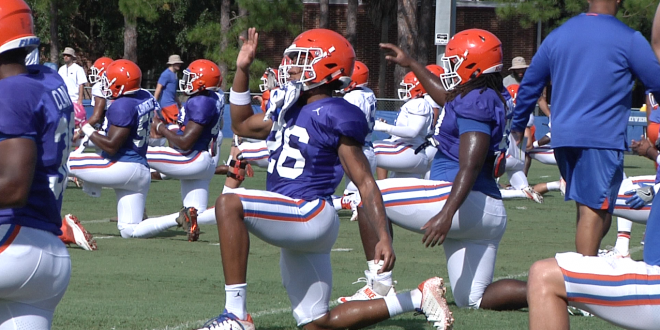 With only 3 weeks left until the Gators play under the lights in the Swamp, the team took to the Southwest Recreation Complex for a change of scenery since classes have ended. Supposedly, the Gators have not practiced there since Meyer was at the helm. Saturday’s full practice was open to the media, however, we could only film periods 1-7 like normal.

The team opened practice with what looks to be their new Oklahoma drill tradition.

Circle of death or circle of life. Whatever you want to call it, it got Feleipe Franks hype! pic.twitter.com/iPGdyLmzbq

Then the Gators worked on special teams, before moving on to position drills and eventually 7-on-7 drills to work on the QB’s passing game.

Cece Jefferson gets in for what was absolutely a sack against Feleipe Franks. But it wasn’t called. Chauncey Gardner-Johnson still breaks up the pass to Van Jefferson. He comes up yelling: “Stop playing with me.”

Monday, the Gators are scheduled to hold an in-house scrimmage.