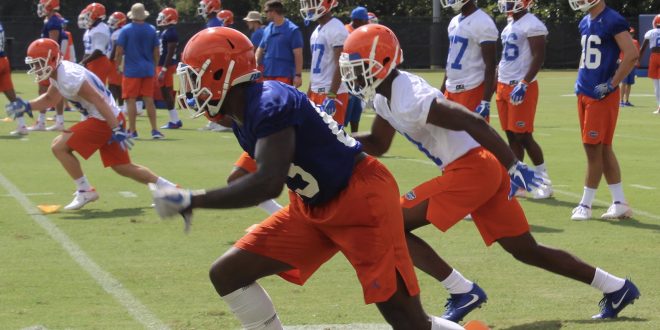 Former Gators, Trey Burton and Jordan Reed are currently tearing it up in the NFL, yet the tight end position at Florida hasn’t been getting a lot of attention over the past few seasons. In 2017, the tights ends only had 26 catches for 288 yards with two touchdowns. The two leaders were DeAndre Goolsby, who had 13 receptions for 105 yards, and Moral Stephens, who had six reception for 141 yards. However, Goolsby graduated and has recently signed with the Jacksonville Jaguars. The current tight ends believe that Mullen’s offensive game plan will utilize them a lot more.

Tight end R.J. Raymond, says that he expects an increase in the number of receptions between his fellow TEs.

Gators added two freshmen Dante Lang and Kyle Pitts, as well as, gained a JUCO transfer Lucas Krull. Kemore Gamble says that the addition of these guys is making everyone “Go harder.” Gamble also commented on how C’yontia Lewis has been showing leadership at the TE position.

What the LB’s See

Linebacker Vosean Joseph has been facing the tight ends in practice and he expressed how elevated they have become during the offseason.