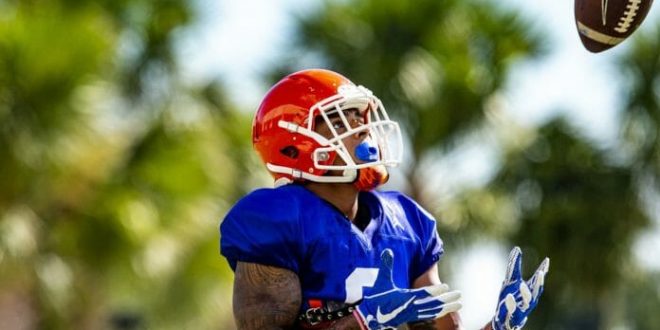 Trevon Grimes, a highly recruited receiver from South Florida, has had quiet a journey since leaving high school in 2017.

Coming out of St. Thomas Aquinas High school, Grimes was a five-star recruit. Being recruited by many schools throughout the country, he choose to begin his career at Ohio State. Before entering college, he was coming off a torn ACL.

Grimes has not had that much of an opportunity to show his full potential to the world. Enrolling at Ohio State his freshman year, he only spent a month and half of his career there due to family issue back home. Before leaving Ohio, he had a chance to play in two games where he caught three passes for 20 yards before departing from the program.

Being a Florida resident closer to home and family.

Why not travel back home and play for such a dominate college in Florida ? Before choosing Florida, he looked over his options such as Miami University and Florida State. Committing to the Gators was what Grimes felt was the right thing to do.

With the Gators’ season only a month away, Grimes did not know if he was going to be cleared by the NCAA due to transfer rules. Determined by the NCAA, they granted him eligible to play for the upcoming season.

Head coach Dan Mullen says he his excited for Trevon Grimes to be officially cleared and be a part of the Gators’ roster. Thankful for the NCAA understanding the situation, and is thankful to the UAA administration staff for helping for the past six months of this process.

Grimes, who stands at 6-foot-4 and weighing in at 214 pounds, should be one to watch this upcoming season. He has an all-around game that many receivers lack. Grimes is a big receiver speed-wise, can make plays and catch the ball well.

Grimes make his debut as a Gator in their first game of the season, hosting Charleston Southern on Sept. 1.