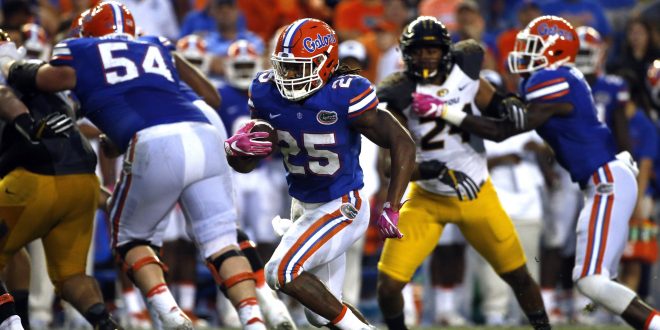 The Florida Gators football team has a wealth of talent at the running back position this season, which gives the offense a lot of options when it comes to play calling.

This year’s roster features Jordan Scarlett, who has broken several Gators records, last season’s top RB Lamical Perine, Malik Davis, and Adarius Lemons. In addition to them, there’s two freshmen, Iverson Clement and Dameon Pierce, who also have immense talent and make the team so deep at the position.

Since each of these players has the ability to make an impact on a game, the competition between them for the starting job has been tough. Because of this, it’s going to be a difficult decision for Gators coach Dan Mullen and the coaching staff to decide who will get the lion’s share of the carries.

Lemons says all the RBs are trying to continuously improve during this battle for the position and that there are certain things Mullen is looking for from each of them.

One play maker the Gators will be glad to have back is Scarlett. After coming off a suspension, he’s looking forward to getting back on the field and having the ability to make a difference in the game — something he wasn’t able to do last year.

He said last season’s LSU game was particularly tough for him to watch. The game against them in October, as well as the Georgia game, are the two he’s most excited to play in this season.

An improvement all of the RBs noted throughout the entire team is their chemistry. According to Perine, this is the closest group of RBs there has been during his time at Florida.

Scarlett says the culture around the program has definitely changed since Mullen became the head coach, thanks to his emphasis on all the players being accountable for each other.

Family outside of football also plays a big role for some players. One of those is Perine, whose 4-year-old brother, Austin, began feeding the homeless back in Birmingham about five months ago.

“President Perine” uses his allowance to help do this for people who are less fortunate than him, and Lamical Perine says having those sort of positive people in his life is really good for him.

You don’t have to win an election to become President! We all can be Presidents in our own rights! Help someone in need! “Don’t forget to #ShowLove pic.twitter.com/N6BLQtpjjW

In addition to the RB position, there’s also still a big question mark at the quarterback position. But regardless of whoever wins that battle, their job is going to be made much easier because of the skills of each RB Florida has at its disposal.

At this point, the RBs feel confident will all of the QBs and believe that whoever starts will be productive and lead the team to a lot of wins.