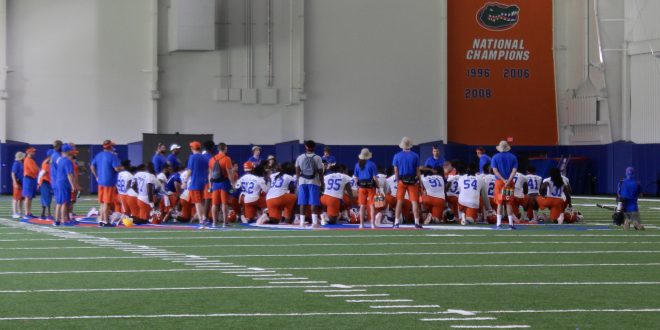 Gator Football: From Walk-On to Scholarship

Monday night was a special one for two members on the Florida football team. The hard work of two walks-on finally payed off when coach Mullen asked R.J Raymond and Nick Villano to stand up. Mullen posed the question, to each of them, “What’s your most important role on the team?” After both players answered, Mullen informed Raymond and Villano that they are now on scholarship.

As seen in the video, both players were embraced by their teammates with joy.

“It was huge weight off my shoulders,” Raymond said.”It let me know that everyone around here is appreciating the work and the time I’ve put in to this.”

R.J. Raymond, a redshirt senior from Atlantic Beach, Florida. Raymond is a 5th generation Gator, grew up a die hard Florida fan. His father was a kicker on the team back in ’82-84′. For anyone a scholarship would mean a lot, but for someone who bleeds orange and blue the awarded scholarship really meant a lot to him and his family.

Raymond’s explained that his family was ecstatic about the news.

Since his first day on the team he has played a number of positions. In his time at Florida, Raymond played defensive line, fullback and special teams. Towards the end of his time with the former staff, they had him practicing at tight end. When Mullen took over as head coach, Raymond had to ask where he wanted to use him. Mullen decided to leave him at tight end. Raymond believes playing so many positions has helped his playing abilities.

“I was Kinda in shock.” Villano said. “It was a good feeling and words really can’t describe the feeling. It was just amazing.”

Offensive lineman, Nick Villano is from Wellington, Florida and attended American Heritage High School. As a redshirt junior Villano has yet to see any game time at Florida.

Villano said that in the moment the scholarship offer was very unexpected.

Like Raymond, the first people Villano contacted were his parents, who he woke up with a FaceTime call.

Throughout training camp, Villano took reps at center and left guard, however, during the scrimmage Sunday the coaches had him playing right guard with the first stringers. Villano said it was an easy transition.