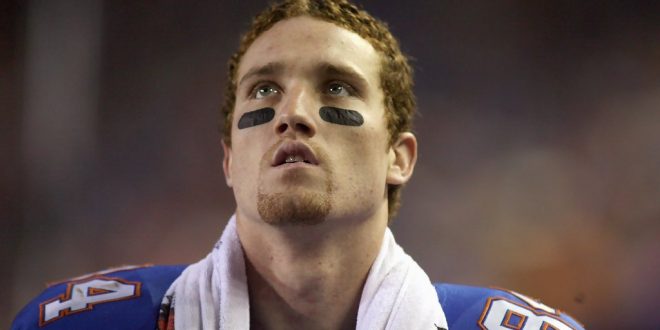 Former Florida tight end Tate Casey is joining the Gators IMG Sports Network broadcast team as a sideline reporter this upcoming fall. Casey will work alongside Mick Hubert, Lee McGriff and Jeff Cardozo. He will be featured on Voice of the Gators and pregame, halftime and postgame coverage.

Casey said the opportunity to join the broadcast team “came out of the blue.”

Also, Casey joins the broadcast team on the 10-year anniversary of the Gators 2008 BCS National Championship team. Florida is honoring the accomplishments of the team this season. Casey said he keeps in contact with his former teammates despite life separating them after football.

The former tight end is grateful that he could be a part of the reunion after being honored for the 2006 BCS National Championship. Although he hasn’t seen some former teammates in a long time, he is happy he can introduce them to his family and talk about their lives.

Going out of his comfort zone in an opportunity like broadcasting is something he is looking forward to. However, he hopes he can simplify his extensive analysis for the listeners.

Additionally, he recognizes Florida Head Coach Dan Mullen’s philosophy after working with him in his time as a player. Therefore, understanding the playstyle and discussing the issues of the team over the last couple of seasons will be a major part of his experience.

The two-time national champion and SEC champion played for the Gators from 2004 through 2008. Casey committed to the Gators out of Longview, Texas on Jan. 11, 2004 after his official visit two days before. Casey finished his collegiate career with 28 receptions and seven touchdowns. On the other hand, the Texas native also was a part of the Gators baseball team that was runner-up at the 2005 NCAA College World Series.