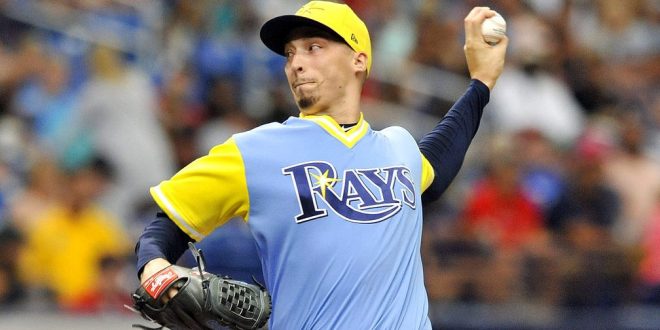 The Tampa Bay Rays are rollin’ right along in the AL East.

They solidified a three-game series sweep of the Boston Red Sox in a 9-1 rout on Sunday. The Red Sox were outscored 24-5 in the series and have now lost six of the last eight games.

It was the first sweep of the season for Boston.  It was also the first time they’ve been swept by Tampa since 2014. And with Boston sitting first in the AL East, Tampa’s sweep made a huge statement: they’re a better team than we thought they were.

Rays’ pitcher Blake Snell had himself a day against Boston on Sunday, striking out eight and only allowing one run on two hits over six innings.

Boston pitcher Hector Velazquez had a rough time in the series, allowing a slew of singles and eight runs in Game 1. But Red Sox manager Alex Cora isn’t worried.

Could the Rays Be Playoff Bound?

Prior to the start of the season, Tampa was projected to lose 100 games. Now, they are over .500 for the first time since 2013 and have won eight straight games at home.

The Rays are silencing the critics and naysayers – for now. The odds of reaching the playoffs are slim. But don’t count them out just yet. They’re clicking on all cylinders right now, and they know it.

“We’ve got a lot of baseball left,” Snell told the Tampa Bay Times. “But I think if we continue to just do what we’re doing right now and continue to focus on all of us getting better and better, I definitely see us having a chance to make a playoff push.”

The Rays will take on another powerhouse team in the Atlanta Braves, leaders of the NL East, at SunTrust Park on Tuesday at 7:35 p.m.

Camille Woodhouse is a Sports and Media student at the University of Florida College of Journalism and Communications. In the past, she has covered the Atlanta Falcons and Florida Gators football for various sports news outlets. She is an Atlanta native and a fan of football.
@CJW_SportsRadio
Previous AL East All of a Sudden a Race Again
Next Dan Mullen Names Feleipe Franks Starting Quarterback