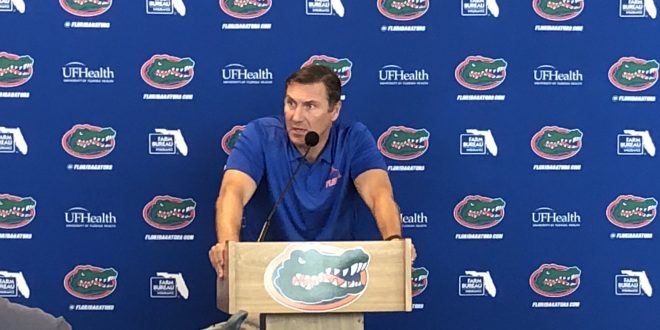 Mullen ruled that Franks’ athleticism and ability to extend plays gives the Florida offense the best opportunity to win.

Mullen said the competition was really close, but it was the “extra little things” that set Franks apart. It came down to what Feleipe could do, rather than what he or any quarterback was projected to do as the season goes on.

Mullen said Franks’ strengths are his good arm, his unique throws, and “just pure talent.” He is very athletic, which shows that he can run the ball, or extend plays. He has good size and isn’t afraid of being a physical player.

Mullen said he didn’t even take Franks’ experience of playing in a game into consideration. “I never got to see him play in a game, so I didn’t use that as part of the evaluation.”

Mullen said Franks will continue to grow, get better and faster at making reads and at his accuracy. Mullen said they will even build on “unspectacular plays.”

Mullen said that all of the quarterbacks have a lot more development ahead of them. Mullen explains that these three players have less experience than typical quarterbacks earning starting roles.

Repetition is Mullen’s answer to improving on the unspectacular plays. Mullen is using his experience to help teach the quarterbacks what will happen before it happens. Mullen said it’s coming along, but they’re still learning.

Mullen doesn’t know how the other quarterbacks have handled the news. He told them on Friday, and the team hasn’t practiced since. However, he looks forward to seeing how everyone handles their roles.

For game one, Mullen wanted the uniforms to be traditional (blue jerseys and white pants).

Mullen said he doesn’t have a plan set for quarterbacks to play certain series of the game Saturday. Due to the unpredictability of a football game, Mullen will play it by ear when and if sending in a relief quarterback. But Mullen said he does love getting players on the field to help them develop at any position.

Those players may or may not include, Shawn Davis, David Reese, and C.J. McWilliams, whom Mullen deemed questionable this week due to injuries. Mullen said it will be a game-time decision for those three. However, Mullen said Jacob Copeland playing Saturday looks doubtful.

Opening the season against a non-power conference team won’t be a bad thing this year, because it allows everyone to get used to the routine. But he believes this is a chance for the other team to prove themselves against the Florida Gators.

“They have a unique offense,” Mullen said. “They might not have the size of teams we play, but they certainly are quick and fast in defense.”

It will be the second year in a row opening up to Charleston Southern for Mullen’s coaching staff. Mullen said, “It will be an interesting little deal for us.”

Franks and the Florida Gators will play under Ben Hill Griffin Stadium’s lights for the first time this season at 7:30 p.m. on Saturday.

Kate Venezio is a fourth-year telecommunication-news student at the University of Florida. Kate does it all: Behind the camera she captures emotional moments as a photographer for the University of Florida Athletic Association. She's comfortable being in front of the camera, too. Kate interviews players, coaches, fans and family members for pre- and post-game coverage as a beat reporter for ESPN Gainesville/WRUF-FM. In addition, Kate produces the sports segment for the weekly WUFT News program. There, she's responsible for writing the script in its entirety to include production commands. The presentation includes video highlights and interviews taped and edited, and Kate then live anchors the final package on a daily deadline. In addition, she writes stories for wruf.com where she informs sports fans of local, state, and national trending topics. Kate also utilizes social media as a tool to help get the stories in front of viewers.
@@kate_venezio
Previous Tampa Bay Rays Hit Hot Streak As Postseason Approaches
Next Nick Saban Still Unsure of Who Alabama Starting QB Will Be