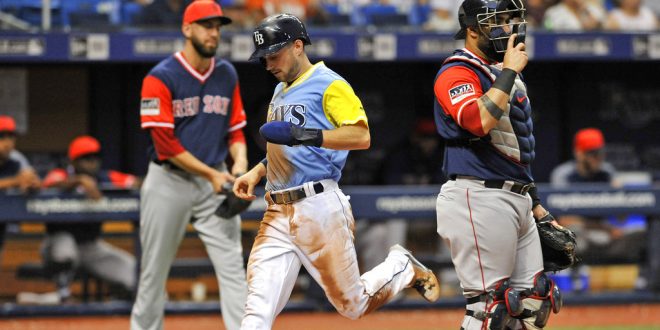 AL East All of a Sudden a Race Again

It seemed like just yesterday the Red Sox were coming off of a four-game sweep of the Yankees and what appeared to be an insurmountable lead atop the AL East.

How quickly things changed though.

Yankees Back In It

The Red Sox (90-42) are now on a three game losing streak after getting swept in Tampa by the Rays over the weekend. In addition, they have lost seven of their past 11 games.

After the sweep, Cora addressed the media on regrouping and refocusing.

“Tomorrow’s a great day,” Cora said. “We’ve talked about off days or whatever. Regroup tomorrow and everybody disconnect and start playing good baseball.”

While Boston has hit a slump, the Yankees (83-47) have taken advantage. They’ve crawled back to within six games of the division lead. New York has gone 8-2 in its last 10 games, and with a whole month left in the season, still have plenty of time to catch its arch rivals.

A @Yankees 4-game sweep of the Orioles has them 6 games back of the Red Sox in the AL East.

Can they come all the way back?

Through 130 games in 1978, the Yankees trailed the Red Sox by 7 games (won AL East in 1-game playoff) pic.twitter.com/Ws5bShYoav

The two teams to have six more games against each other, which provides each team a chance to either makeup ground or distance themselves from the other.

It’s sure to be a fascinating race down the stretch, with the loser of the race basically guaranteed a Wild Card spot. According to ESPN, each team has a 99.9% playoff probability, as they have the two best records in baseball.

Only one will end up with the AL East title though, with everything to play for down the stretch.