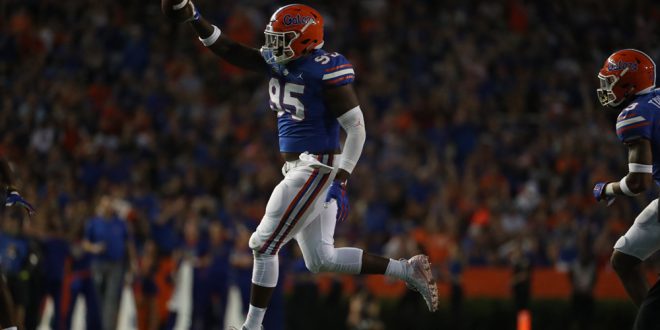 During the Gators' game against the Charleston Southern Buccaneers on Saturday, September 1, 2018 at Ben Hill Griffin Stadium in Gainesville, Fla. / UAA Communications photo by Tim Casey

The Florida football team began the Dan Mullen Era in style at home Saturday night, taking down Charleston Southern 53-6 in an offensive explosion to kick off their 2018 season.

Seven Gators were suspended prior to Saturday’s game. Cece Jefferson, Kadarius Toney, Kyree Campbell, Luke Ancrum, Adarius Lemons, Brian Edwards and James Washington were all suspended for various reasons. Mullen said they did not live up to the “Gator standard.”

Dan Mullen’s first game in the Swamp looked good. Mullen and his staff were able to call plays effectively and lead Florida to a win. Mullen said he liked how quarterback Feleipe Franks looked in this first game, but the team has improvements they need to make in practice this week.

Feleipe Franks led the Gators to an offensive explosion from the start. Franks threw five touchdown passes in the first half; the last Gator to throw five passing touchdowns in a game was Chris Leak in 2004.

Take a look at the jump pass from Franks to Cleveland toward the end of the second quarter.

Here’s what Franks had to say about the play leading up the jump pass.

A 22-yard touchdown rush from Terrence Wilson got Charleston Southern on the board in the fourth quarter. However, the Gators blocked the extra point, running it all the way back for a two-point conversion.

The Gators kick off SEC play next Saturday as they host Kentucky at 4 p.m.; the Wildcats won their opener 35-20 over Central Michigan.

Born and raised at the ballpark! Typically quiet- until it comes to sports. I'm a South Florida native with a passion for baseball nearly as strong as my faith. Grew up in garnet + gold, turned out sporting orange + blue. Likely to be found with a camera. And yes, I take food pictures.
@victoriarossman
Previous Feleipe Franks Impresses in Gator Season Opener
Next Recruits Attend the First 2018 Gator Game Day