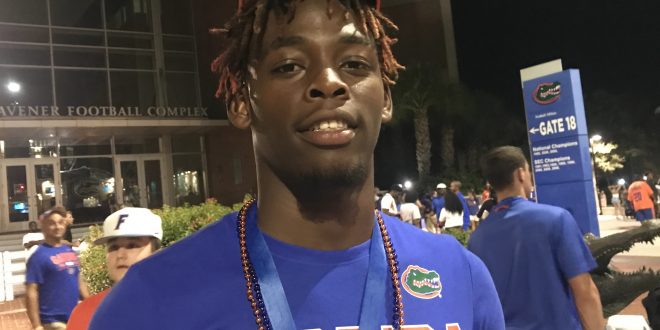 The Florida Gators showed off their new and improved uptempo offense as they beat Charleston Southern 53-6. Among those impressed were highly sought-after high school football recruits.

“My first time in the Swamp. It was loud. It was a lot of hand clapping.” 4-Star LB, Diwun Black, exclaimed after watching Florida take the win over CSU. Black said that he really enjoyed watching the Gators defense, “Oh they didn’t let them get a yard almost.”

After the UF vs CSU game, UF commit @diwunblack said he loved watching the Gator’s defense and that he would rank his visit 10/10. Black also says that the coaches are thinking about using him at S or possibly OLB. #Gators #ESPNGainesville pic.twitter.com/c2Z2DHvoLY

Diwun Black is from Kissimmee, FL and is planning to come to every home game this season, which is great for the Gators because Black loves to help recruit and tell other players why Florida is all about “family and commitment.” And mentions another reason he likes UF, “I like Gainesville. It’s chill and it’s just right for me.” Black said he’s done visiting other schools. 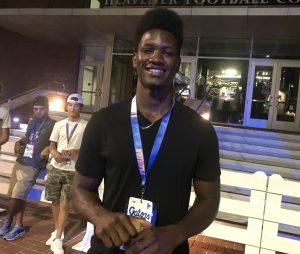 Three-star ATH, Ja’markis Weston, thinks he’d be a perfect fit for the Gators new uptempo offense. Weston also really likes how they spread the ball offense. He said that coaches mentioned they’d want to use him as an outside receiver. Ja’markis Weston is from Clewiston, FL and the next game he’s planning to attend is the LSU game. Weston says he’s suppose to visit Penn St. when they host Ohio St.  However, Weston did say he’s 100% committed to Florida and what brought him to a 100% was “The love and atmosphere.”

“Oh the offense ran pretty smooth today.” Sander said, “A lot smoother than last year since Mullen got a part of it.” Trey Sanders, is a five-star RB and brother of Gator LB, Umstead Sanders. Trey explained how much he enjoyed watching his brother play, “Always a blessing man. I’ve seen my brother go through a lot to actually get the opportunity to play college football at the D1 level. It’s pretty good.” Sanders says that he’ll probably make his commitment in October or November and that he does want to sign early. Sanders was once committed to Alabama and says they’re still recruiting him and that he still has a love for them.