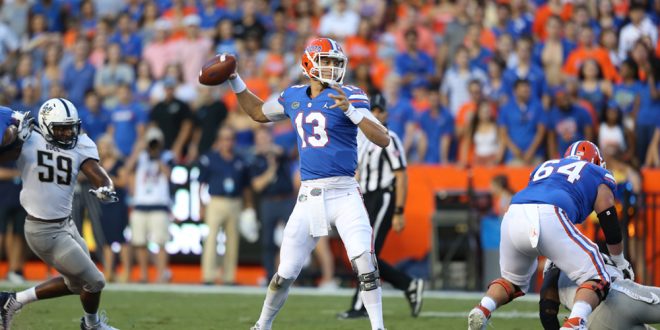 During the Gators' game against the Charleston Southern Buccaneers on Saturday, September 1, 2018 at Ben Hill Griffin Stadium in Gainesville, Fla. / UAA Communications photo by Jay Metz

When Feleipe Franks was named as the starting quarterback on Monday afternoon for the Florida football team, one big question was raised; could he handle the job again? On Saturday night, that question seemed to disappear.

The redshirt sophomore looked impressive on the field. In the first two minutes of the game, Franks passed to Trevon Grimes for a 34-yard touchdown. This was just the beginning of what would be an incredible first half for the quarterback.

Franks only played the first half of the game, but only to give some of the other quarterbacks some playing time as the Gators were crushing Charleston Southern, 38-0. However, he didn’t exit the game without leaving his mark on it.

With 5:49 to go in the second quarter, after Franks threw two six-yard touchdowns already, he threw a three yard jump pass to Tyrie Cleveland for yet another touchdown.  All this, coupled with one more touchdown pass at the end of the quarter, brought Franks’s grand total of touchdown passes to five.  The last Florida quarterback to have five touchdown passes in a game was Chris Leak in 2004.  Franks finished 16-of-24 passing for 216 yards. He said after the game he really tried to spread the ball around so everybody could get a touch.

“I think we’re just scratching the surface,” Franks said. “We have a long way to go where everyone can reach their full potential.”

“I thought he played well,” Mullen said. “I thought he made some good decisions in the run game as well, was able to move the team and put the ball in the end zone.”

Looking Ahead with Franks

Next week will be a good test for Franks and the rest of the Gator offense when Kentucky comes to town next Saturday. As for now, the team can rest up and get ready to be back in action on Monday.

“It was a great win for us. We have a lot of work to do,” Mullen said. “But we’re going to come back, get back after it on Monday and get ready to start SEC play this week.”

Courtney Mims is a junior telecommunications major at the University of Florida. She enjoys covering all Gator sports and drinking gallons of Starbucks coffee while doing so.
Previous No. 4 Gators Volleyball Drops Home Opener
Next Gators Crush Charleston Southern in Season Opener, 53-6