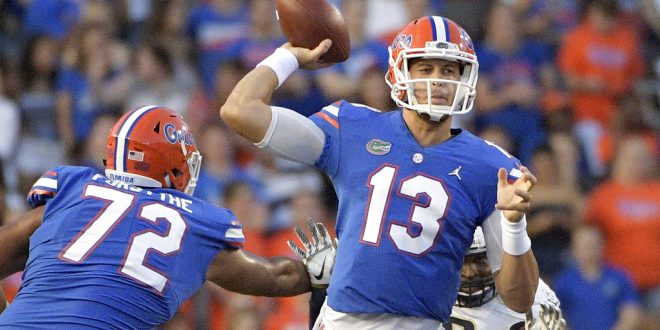 Feleipe Franks is looking to have a much better time against Kentucky in 2018.

Sure the result was what he wanted in 2017 but it was the road to that point that Franks looks to change.

Not Looking At The Past

In late September of  last season, Franks was removed in the third quarter of last years match-up as the Gators were down 13 points.  Florida ultimately came back to win a thriller in Lexington to extend their win streak over Kentucky to 31.

Feleipe wasn’t necessarily the worst quarterback in the country that night as his stats weren’t too bad. He completed seven of his 12 passes for 85 yards and a touchdown. However, he wasn’t giving Florida what they needed at the time as then Florida head coach Jim McElwain chose to go with Luke Del Rio down the stretch. Del Rio would end up starting the next game before a shoulder injury ended his college career.

Ready For The Future

Franks is looking to have the best of both worlds as he tries to win and play well.

Franks said that he isn’t too focused on how he played against Kentucky last season. Instead, he says he is more concerned about his play this upcoming Saturday.

One of the reasons why Franks may look better is his comfort level within the offense. The quarterback says he is a lot more confident in his ability to lead the offense now than he was last fall.

Time For Franks to Succeed Against The SEC

In the season opener against Charleston Southern, Franks completed 16 of his 24 passes for 219 yards and five touchdowns.