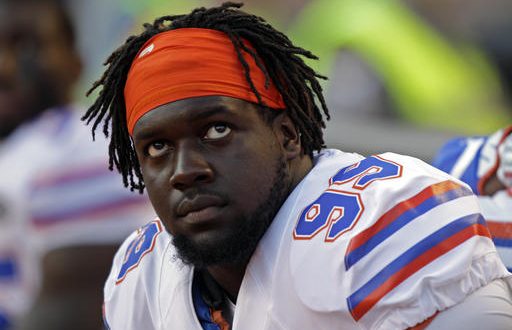 Gators’ Jachai Polite Giving Up Candy and Getting Better Every Day

Defensive lineman Jachai Polite has all the tools, work ethic and coaching needed to become a star for the Gators.

Jachai Polite has plenty of natural talent. He knows it, his coaches know it and his teammates know it. One of his teammates and fellow pass-rusher T.J. Slaton said he’s a really talented player.

“He’s going to be a first-rounder,” Slaton said. “He has the best close out of anybody on this team, anybody on our defense he closes the best.”

With all his natural talent, Polite doesn’t take it for granted. On his closeout ability and technique, Polite said that he used to “slack a little,” but he learned how to develop his game and learned the value of hustle.

Since last season, Polite has lost roughly 25 pounds and is around 11 to 13 percent body fat. He credits strength and conditioning coach Nick Savage, who joined Florida’s staff after leaving Mississippi State with head coach Dan Mullen. Many Florida players have credited Savage with getting them in great shape, and Jachai Polite is just one more player added to that list. Polite said that his weight loss “has just been a miracle with Savage.”

One change that Polite made in the weight loss process was cutting out candy, specifically Swedish Fish. Polite said he made the choice in order to commit to his football future.

Jachai seems to have learned how to really enjoy football and his teammates. Even though Polite grew up wanting to play basketball, he said being a pass-rusher is a “very fun” position.

Celebrating each other’s successes is something that Polite and the Florida defense as a whole seem to do very well. Polite said his teammates “want me to make the play” and that “makes the team better collectively.”

In the season opener, Polite had four total tackles. He admitted that he had a tough time getting to the quarterback in the game. Now, he’s focused on playing against Kentucky. Polite noted how good the Kentucky running game led by Benny Snell Jr. can be, so look for a focus on stopping the run from Jachai Polite and the Gator defense this Saturday.