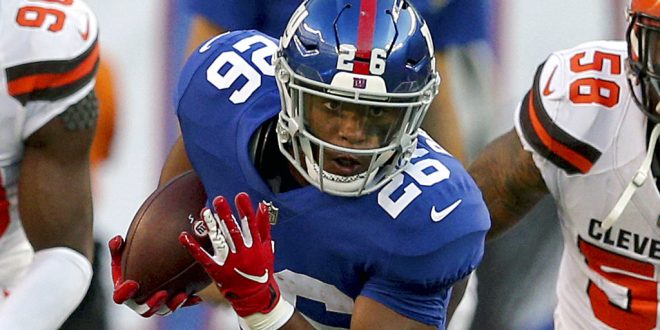 FILE - In this Aug. 9, 2018, file photo, New York Giants running back Saquon Barkley (26) runs against the Cleveland Browns during an NFL preseason football game in East Rutherford, N.J. There’s no doubt Barkley is the most-hyped rookie to join the Giants since future Hall of Famer Lawrence Taylor donned the blue in 1981. With the season opener at home against AFC runner-up Jacksonville on Sunday, it’s time for Barkley to live up to the hype, just as Taylor did after also being taken with the No.2 overall pick. (AP Photo/Brad Penner, File)

NFL regular season action is nearing, and No. 2 overall pick Saquon Barkley is expected to take the field after being away from the game for several weeks.

The New York Giants‘ prized rookie missed the following three preseason games after succumbing to a hamstring injury against the Cleveland Browns in Week 1. Since returning to practice last week, though, Barkley will likely make his NFL debut against the Jacksonville Jaguars on Sunday.

Despite the limited action and lack of touches during the preseason, Barkley is preparing for the opening game of the season and said he’s ready to take on a full workload.

During his first preseason game against the Browns, he had four carries for 43 yards, including a 39-yard run early in the first quarter. The former Penn State standout will look to put his explosiveness on display Sunday. He will have his work cut out for him against one of the league’s top defenses, though.

Barkley won’t be the only player making his debut this weekend.

Fellow rookie and Jets quarterback Sam Darnold shared some words about the running back and being in the same city with him.

Feeling Good About His Return

With a week of team drills in practice under his belt, Barkley said he thinks he’s feeling comfortable for game action and doesn’t want any setbacks.

Regular season game action is not far off. Fans will soon get to see if the Giants’ new offensive weapon is back up to speed. One analyst thinks he will have a historic performance against the Jaguars.

"I think Week 1, Saquon Barkley has one of those historic performances."@PSchrags thinks @Giants rookie RB @saquon could have a memorable debut on Sunday vs the Jags. pic.twitter.com/2Ml1CWDoSu

Currently, Barkley is listed as the primary running back on the depth chart. Among those listed behind him include second-year running back Wayne Gallman, who finished 2017 with 476 yards in 13 games played, and veteran Jonathan Stewart.

In addition to his regular duties, Barkley might also return kicks on Sundays. Head coach Pat Shurmur said he could be used in that role this season, particularly because he had experience on the kick return in college.

After months of preparation, only a few days separate Barkley from his first game. The Giants are set to host the Jaguars at MetLife Stadium on Sunday at 1 p.m. ET on FOX.

@wclewis_uf
Previous With Bell Still Holding Out, It’s Business As Usual For Steelers
Next Feleipe Franks Finally Settling in as Florida’s Starting QB