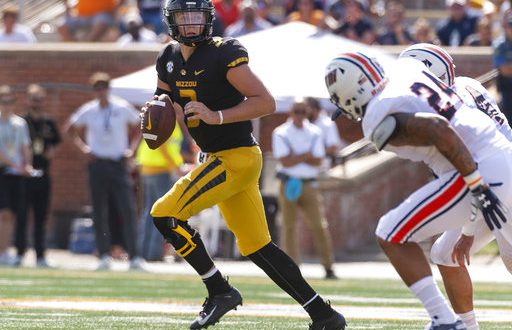 The Missouri Tigers are preparing for their Week 2 matchup against the Wyoming Cowboys on Saturday, September 8.  Last week, the Tigers swept their opponent the Tennessee-Martin Skyhawks 51-14.

From the offensive line working well together to the excellent defensive performance, Tigers head coach Barry Odom was more than pleased with his team last week. In a post-game interview, Odom said,

“I was proud of the work they put in, the focus, the preparation that it takes to go in a play the first game. We’ll learn from our mistakes and start over again.. and get ready for week two.”

Odom promised that freshmen were going to play and 14 freshmen played on Saturday. He expressed his content in their performance and hopes to see them continue to grow throughout the season.

After securing a win last week, Odom says that he is working hard to ensure the team will be ready for the Cowboys.

“We’ll have a challenge this week leading up here to play a very solid Wyoming team that I got a lot of respect for” (Odom).

They’re [Mizzou’s offensive line] a tight-knit group. It’s important for them to play well. They want to put ownership on themselves so that we can be as effective as we can be offensively” (Odom).

Last week, Kevin Pendleton was out due to injury, but Samson Bailey was able to step in for him. While Odom was proud of Bailey’s performance on Saturday, he also said that he looks forward to having Pendelton back on the field.

Odom was also pleased with Lock’s performance on Saturday. Lock threw for 289 yards and four touchdowns before calling it a game. Last season the QB led the nation with 44 touchdown passes. The head coach praises Lock for his hard work both on and off the field. He said in an interview that the team respects him.

“He’s a great leader, very well respected. He’s done that and got that because of the work he puts in and his willingness to get outside his comfort zone” (Odom).

The Missouri Tigers will host the Wyoming Cowboys on Saturday, September 8 at 7 p.m on ESPNU.