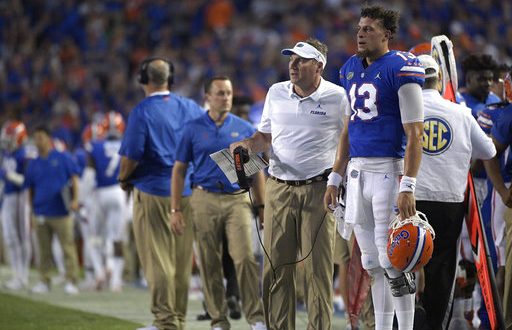 Injuries on Florida’s Defense: One Issue in a Gator Loss to Kentucky

Florida’s defense lost another starter due to an injury suffered on Saturday night in their loss to Kentucky. With several starters on the sidelines due to injuries already, Marco Wilson left the game in the first quarter. Wilson was grabbing his knee and later walked off the field unassisted. Wilson’s absence, along with several other starters on Florida’s defense, contributed to Kentucky’s ease at picking up rushing yards throughout the night. The Wildcats rushed for a total of 303 yards on Saturday night.

According to Marco Wilson’s dad, Wilson will not be returning to the field for the rest of the season.

Thx for all the inquiries and concern. Unfortunately Marco has torn his ACL and will miss the remainder of the season.

Rushing was vital for the Wildcats as they went just 11 of 16 in passing attempts and Kentucky’s sophomore quarterback Terry Wilson also threw an interception.  But it wasn’t just on the offensive side of the ball where the Wildcats dominated the Gators…Florida was pushed around up front on offense and defense and the lack of physical play up front must be addressed soon if Florida is to have any consistent success in the SEC this season.

Wildcats down the field

Kentucky found their way through the Florida defense rushing for 161 yards just in the first half. Kentucky’s sophomore quarterback Terry Wilson and junior running-back Benny Snell took turns getting the Wildcats closer to the end zone combining for most of these yards.

Florida linebacker David Reese was not on the field Saturday due to injury and Florida’s defensive-end CeCe Jefferson also did not play against the Wildcats. These are just two of the many players that are not on the field for the Gator defense and Mullen said this could cause some concern.

Snell finished the game rushing for 175 yards. Terry Wilson rushed for 105 total yards and added another 151 yards through the air.

Wilson and Snell’s performances in Gainesville led Kentucky to break the 11,620-day drought of losing to Florida.

"This is the best feeling in the world … we shocked the world."

Florida will host Colorado State Saturday in Gainesville with kickoff set for 4 pm.