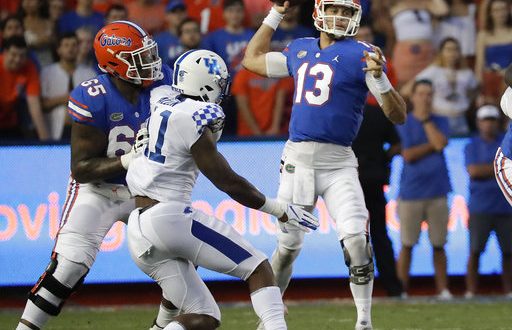 Only one team came to Ben Hill Griffin Stadium on Saturday night and was able to play consistently physical football for 60 minutes.

The other dropped to 1-1 on the season in front of their home crowd. An announced attendance of 80,651 also witnessed a 31-year-old win streak come to a brutal end.

Mark Stoop’s Kentucky Wildcats toppled Florida 27-16, and they now improve to 2-0 on the young season.

Dan Mullen’s first SEC victory as head coach of the Florida Gators will now have to wait at least another two weeks until the Gators visit Tennessee on September 22nd.

After the performance, Mullen said he was disappointed with his team’s lack of “overall physicality.”

Having already rushed for over 100 yards in Week 1, it was no secret that junior running back Benny Snell Jr. would be a big part of the Wildcats’ game plan.

But simply put, he took it upon himself to do some serious damage against a defense that labored. He carried the ball 27 times for 175 yards — the fourth-highest rushing total of his college career.

All night he made quick cuts into the outside of the field. Snell was quick through his holes, and his offensive line gave him a lot of room to run.

The Gators couldn’t really create consistent pressure at the point of attack. It’s an issue that Mullen knows he will need time to fix.

Sophomore corner Marco Wilson‘s season-ending knee injury won’t help that cause. Wilson had to leave the contest midway through the first quarter after jostling with Dorian Baker at the line of scrimmage.

After the game, it was announced that Wilson had suffered a torn ACL.

Wilson’s absence had an immediate effect on the game. Florida is already young and thin at the corner position and at times that youth showed against Snell Jr.’and Cats quarterback Terry Wilson.

The sophomore was hooked for parts of last week’s contest, but he really played with poise and confidence against Florida. He threw for two touchdowns on 11 for 16 passing while adding 105 yards on the ground.

Once Florida’s Wilson left the field, Kentucky’s Wilson began to target the weak side. Freshman corner Trey Dean III struggled at times, and junior safety Jeawon Taylor was beaten over the top for a 54-yard touchdown.

Too little too late from Florida’s offense

Looking at the final stat sheet it would be hard to suggest that Florida’s offense looked good at any point in this game. Although, Florida actually took a 10-7 lead into halftime.

Despite the lack of any rushing attack for the first three quarters, Feleipe Franks was able to move the ball pretty well in the first half. But Mullen’s offense was nothing short of flat after the interval.

A handful of drops from some receivers and a few missed throws by Franks and the Gators began to trail big. The offense seemed one-dimensional almost all game, as too much was asked of Franks on the night.

He dropped back to pass 38 times and was the team’s leading rusher with only 44 rushing yards. Franks said after the game that he knows this game can serve as a learning curve for the Gators.

A quarterback change won’t fix the Gators’ issues. Most believe Mullen will give Franks enough time to develop and grow in this offense.  It’s clear that Mullen knows he will have to work his players hard if he’s to have a successful first season. Saturday’s loss to Kentucky proved that there are glaring issues on both sides of the ball.  Mullen spent all summer tinkering with his offense, but his defense was potentially much more disappointing on the night.

It’s now up to him and his coaching staff to figure out a strong identity for this squad. They’ll begin preparing for Colorado State on Monday.

After the game, Gator running back Adarius Lemons announced that he intends to transfer away from UF.

Sports media and management student at the University of Florida. Content creator for ESPN 98.1 FM/ 850 AM WRUF.
@TheEdgarChavero
Previous New York Giants Host the Jacksonville Jaguars Preview
Next Injuries on Florida’s Defense: One Issue in a Gator Loss to Kentucky