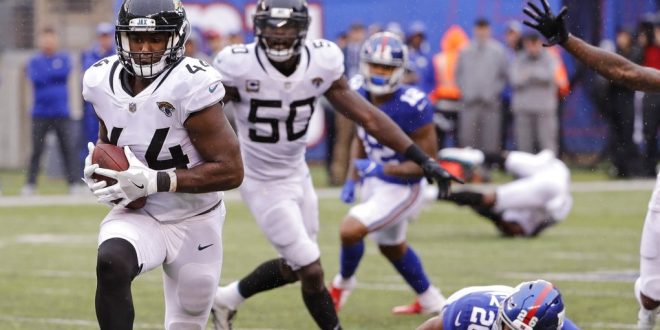 New York Giants' Saquon Barkley (26) watches as Jacksonville Jaguars' Myles Jack runs back an interception for a touchdown during the second half of an NFL football game Sunday, Sept. 9, 2018, in East Rutherford, N.J. (AP Photo/Seth Wenig)

In a game that saw only two offensive touchdowns the whole game, The Jaguars defense showed everyone why they are considered among the elite.

The Jags offense did all of their scoring in the first half, while the defense kept New York out of the end zone.

Jaguars quarterback Blake Bortles led three drives that led to scores in the first half. The biggest score came via a short touchdown pass to running back T.J. Yeldon.

The other two scores came off the leg of kicker Josh Lambo, who hit two 39-yard field goals.

On the other side of the ball, the Giants could not get drives going against the Jaguars’ stout defense. The Jaguars continually got big stops, forcing the Giants to settle for field goals.

The third quarter saw the offenses struggling, as both teams traded punts back and forth after an early field goal by the Giants made the score 13-9.

The Jaguars defense again came up big, however, on the Giants first drive of the fourth quarter.

Jaguars linebacker Myles Jack picked off a deflected pass by Eli Manning, taking it to the house for a 32-yard interception for a touchdown. This score gave the Jaguars a two possession lead in the fourth quarter.

*Clears Throat*@MylesJack was not down (on that INT)… and took it to the house.#DUUUVAL pic.twitter.com/e2zxtXmhuH

The Giants responded with a 68-yard touchdown run by Saquon Barkey, but they failed to convert on the two-point conversion. After the big run, both defense held strong, stifling the offenses.

The Giants came up with a stop to set up a final drive, but a muffed punt cost them a final possession in the final minute. With the special teams blunder, The Jaguars took the win 20-15.

Jacksonville running back Leonard Fournette went down in the second quarter with a hamstring injury, forcing T.J. Yeldon into the starting role.

Fournette struggled last year with injuries and will look to get healthy before Jacksonville’s next game.

The Jaguars defense showed out in the season opener, recording two sacks, eight tackles-for-a-loss, six quarterback pressures, an interception and a big stop on a two-point conversion attempt.

After the game, quarterback Blake Bortles was not surprised by the success of the Jags defense, saying:

Bortles was 18 for 33 on pass attempts with 176 yards, a touchdown and an interception.

For the Giants, Saquon Barkley impressed in his debut, rushing for 106 yards and a touchdown on 18 carries.

The Jaguars will play the New England Patriots as their home opener next week. This matchup is a rematch of last year’s AFC Championship game.

The Giants will travel to Dallas to take on the Cowboys for a Sunday night game.

On Sunday, the Jacksonville Jaguars fell to the Arizona Cardinals 31-19 dropping them to 0-3. …