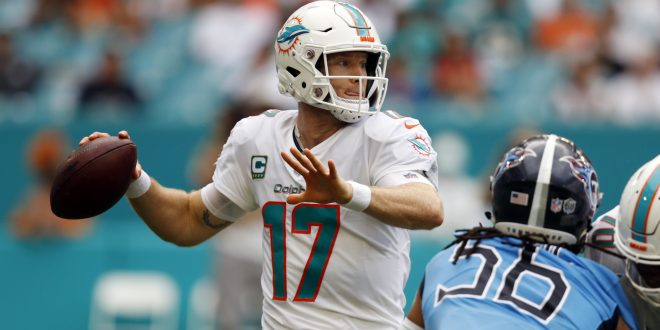 Miami Dolphins quarterback Ryan Tannehill (17) looks to pass, during the first half of an NFL football game against the Tennessee Titans, Sunday, Sept. 9, 2018, in Miami Gardens, Fla. (AP Photo/Brynn Anderson)

The Miami Dolphins brought the thunder in the team’s season opening win over the Tennessee Titans. For the Dolphins to start the season 1-0, they had to wait over seven hours to get in victory formation. In the longest game in NFL history, the Dolphins beat the Titans 27-20 in one of the most bizarre games in recent memory.

When Sunday arrived, the wait for football appeared to be finally over. However, mother nature made both the Titans and the Dolphins wait a bit longer. With just 1:11 remaining in the first half, lightning in the area of Hard Rock Stadium led to the referees suspending the game. This delay took close to two hours before the team could complete the first half. The teams would have a shorter halftime period and come out for the second half.

Then, halfway through the third quarter, there was another weather delay. This time, the delay lasted for two hours before the teams could finish the game. In total, the delays lasted four hours. The delays pushed the game duration to 7 hours and 8 minutes, making it the longest game in NFL history.

Dolphins head coach Adam Gase said he was proud of how his team handled such unusual circumstances.

Sharing similar sentiments was Dolphins quarterback Ryan Tannehill. He said his team battled to get this win.

Taking the weather factor out of Sunday’s game, the main storyline was the official return for Dolphins quarterback Ryan Tannehill. Like the offense, this year was suppose to be the debut of a new and improved Tannehill. During training camp, he even had a brace on his knee saying Tannehill 2.0.

Tannehill would find Stills again this time on a 75-yard deep touchdown bomb with 10:22 remaining in the third quarter.

Gase said he liked what he saw from his quarterback.

They say lightning rarely strikes twice. In football, you almost never get two lightning delays. In a game that was out of the usual entirely, it was only fitting lightning would strike twice in the kickoff return game.

On the ensuing kickoff after the Titans tied the game at 10, Dolphins receiver Jakeem Grant took the kickoff backed up in the end zone 102-yards to the house for the touchdown. This was the second largest kickoff return touchdown in Dolphins history.

Following the touchdown bomb from Tannehill to Stills, the Titans had a long kickoff return of their own. Titans wide receiver Darius Jennings took the return 94-yards to the house for a touchdown. This cut the Dolphins lead down to 24-17.

The chances of getting struck by lightning is one of the most unlikeliest possibilities out there. However, close to those odds might be losing your starting quarterback, starting left tackle and starting tight end in the first game of the season. Not only did the team got stuck in a seven hour game and lost, they also lost three key players to injury.

First, the Titans lost left tackle Taylor Lewan with an injury after Dolphins defensive end Andre Branch shoved him to the ground on a interception return from safety Reshad Jones. A fight would ensue following the injury.

Then, on an interception from Dolphins linebacker Kiko Alonso coming out of the weather delay, Titans quarterback Marcus Mariota injured his elbow and would be out the rest of the game. The Dolphins would get their third interception of the day courtesy of Jones late in the fourth off of Mariota’s replacement, Blaine Gabbert. This would be Jones’ first two interception game of his career.

The third and final injury was by far the most gruesome. Following a reception, tight end Delanie Walker’s right ankle was rolled on by safety T.J. McDonald. He suffered a fractured and had to be carted off the field. To stabilize the injury, the medical staff placed his ankle in a boot as he was carted off.

The Dolphins head into Week 2 undefeated for the second year in a row. They’ll try to rewrite history this year when they travel to New York last year to face the Jets. The Jets beat the Dolphins 20-6 in Week 2 last year.

For the Titans, they’ll hope to have some injured players back healthy next week. In the home opener, the Titans host a division rival in the Houston Texans in Week 2.