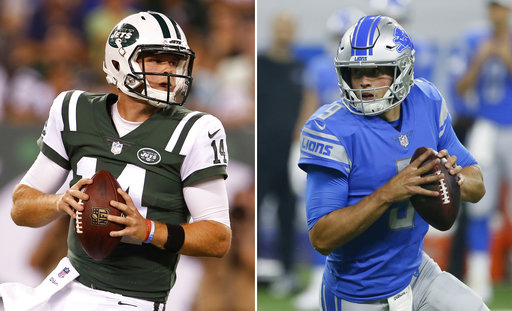 FILE - At left, in an Aug. 10, 2018, file photo, New York Jets quarterback Sam Darnold (14) looks to pass against the Atlanta Falcons during a preseason NFL football game, in East Rutherford, N.J. At right, in an Aug. 17, 2018, file photo, Detroit Lions quarterback Matthew Stafford (9) looks to pass against the New York Giants during the first half of an NFL football game, in Detroit. The Jets plan to make 21-year-old rookie Sam Darnold the youngest quarterback to start opener since 1970 AFL-NFL merger on Monday night in Detroit. After the game, Lions quarterback Matthew Stafford may pass along some advice because he was a 21-year-old starter as the No. 1 overall pick in 2009. (AP Photo/File)

Four teams hit the field Monday night, but only two will start the 2018 season 1-0.

Both teams enter a new era when they step on to Ford Field in Detroit.

Sam Darnold makes his NFL debut as the New York Jets starting quarterback. The rookie is the youngest quarterback to ever start a season-opening game since the 1970 AFL-NFL merger, according to USA Today.

Darnold is excited to take the stage after months of practice.

Jets head coach Todd Bowles said at the end of the day Darnold will be fine. He was the No.3 overall 2018 draft pick after all.

The 21-year-old quarterback brings hope to the Jets who finished 5-11 last season.

Matt Patricia is making his coaching debut for Detroit. The former defensive coordinator for the New England Patriots was hired “in an effort to rebuild a defense that ranked No. 27 in the NFL last year (355.8 yards and 23.5 points per game),” according to CBS Sports.

However, the situation of the Lions’ quarterback is quite the opposite. Matthew Stafford makes his 113th straight start when he opens the 2018 season Monday. Although it’s not a debut, Stafford will still make history Monday night. He’ll pass Tom Brady for the eighth longest quarterback streak in NFL history, according to Mlive.

Monday night starts a clean slate for the Lions. Stafford said last year’s performance has nothing to do with this year’s.

The Rams new additions Marcus Peters, Aqib Talib and Ndamukong Suh will make the Rams hard to score points against. Rams’s quarterback Jared Goff said both the offense and the defense are ready for true competition.

LA Rams head coach Sean McVay agrees that the game will be a difficult one.

Carr finished the 2017 season with 3,496 passing yards, 22 touchdowns, and 13 interceptions, before he was named to his third straight Pro Bowl in January.

Returning with the Raiders is head coach Jon Gruden. Gruden was the head coach of the Raiders from 1998 to 2001. Gruden said he’s glad to be back in black and silver.

Kate Venezio is a fourth-year telecommunication-news student at the University of Florida. Kate does it all: Behind the camera she captures emotional moments as a photographer for the University of Florida Athletic Association. She's comfortable being in front of the camera, too. Kate interviews players, coaches, fans and family members for pre- and post-game coverage as a beat reporter for ESPN Gainesville/WRUF-FM. In addition, Kate produces the sports segment for the weekly WUFT News program. There, she's responsible for writing the script in its entirety to include production commands. The presentation includes video highlights and interviews taped and edited, and Kate then live anchors the final package on a daily deadline. In addition, she writes stories for wruf.com where she informs sports fans of local, state, and national trending topics. Kate also utilizes social media as a tool to help get the stories in front of viewers.
@@kate_venezio
Previous Trust The Process: Dan Mullen
Next Offensive Woes Continue As Florida Soccer Gets Shut Out by UCF