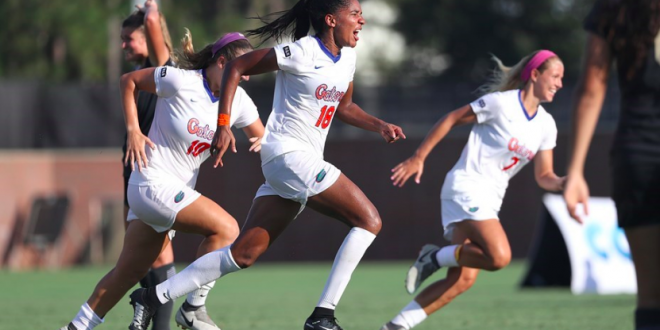 The Gators scored six goals in Lexington Thursday night, while the Kentucky Wildcats came up short. A huge conference win for the Florida Soccer team sets them up for redemption.

The 2018 season has not been the best for the Gators. Prior to the Kentucky match, Florida had not won a game since they played Florida Atlantic on Aug. 19. Other than a tie game (0-0) against UCLA, Florida suffered six losses in the past month, making for an unfortunate seven-match winless streak. Just over a month after their last win, the Gators brutally defeated the Kentucky Wildcats 6-0 for a conference shut-out.

Four seniors players contributed to the six-goal defeat over Kentucky. Laís Araujo played phenomenally with three consecutive goals scored in 18 minutes and 24 seconds, giving her the sixth fastest hat-trick in school history. A hat-trick has not been done this quickly since Gator great Abby Wambach was playing back in 2001.

Alyssa Howell scored her first collegiate goal in the 45th minute to close out the first half of play. Melanie Monteagudo started the second half of scoring off with a goal in the 65th minute. The last goal was scored by Mayra Pelayo to close out the game for a nice conference win, ending their losing streak.

“The shutout was huge. Besides a chance really early, the backline played pretty flawlessly,” Florida Head Coach Becky Burleigh said. “Thought that also was a big step forward for us.”

The LSU Tigers will be coming to Gainesville for Florida’s next conference match. So far, LSU is 0-0-1 in the conference, losing to Texas A&M on Sept. 14 and holding Auburn at a 0-0 draw on Thursday night. Overall, the Tigers are 6-3-1, a record opposite (except for the draw) to the Gators. Florida will be looking to continue their win streak Sunday afternoon, hopefully improving their standing in the SEC.

Watch Florida play LSU on Sept. 23 at 1 p.m. The game will be shown on the SEC+ Network. Also, the team will be attempting to break a Guinness World Record for the most selfies taken with fans in three minutes after the game. Sophomore player Lauren Evans, who recently beat cancer, will be the one taking selfies with fans to raise awareness for pediatric cancer.

3rd-year Telecommunications student at the University of Florida. Also a member of the Women's Track and Field team.
Previous Jacksonville Jaguars Look to Stay Perfect on the Season
Next Local High School Football Preview