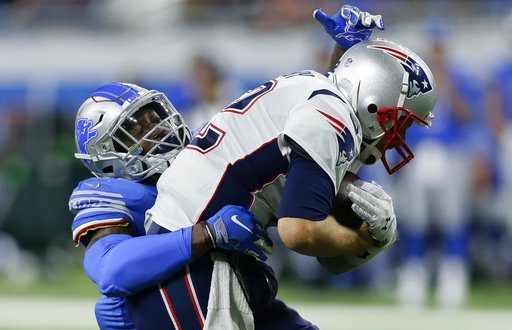 Matt Patricia secured his first win as an NFL head coach when he led the Detroit Lions to victory against his previous team, the New England Patriots. Patricia spent 14 seasons with the Patriots prior to Sunday’s 26-10 win over them.

The Lions’ starting quarterback Matthew Stafford said he’s sure the win meant a lot to Patricia- “Probably no sweeter than to do it against your old team.” The team’s first win over the season meant a lot to Stafford as well.

“We needed this one,” Stafford said. “It was great for them to come into our place on a big stage and be able to do something like that.” Stafford threw for 262 yards, almost twice as many yards as Tom Brady, in addition to two touchdowns and one interception.

The Lions picked up their first win, after losing to the New York Jets and the San Francisco 49ers in weeks one and two. After the game, Stafford said things were looking up for them.

The Lions took the lead in the first quarter and never let it go. A 39-yard field goal from Matt Prater put three on the board for Detroit. The Lions took a bigger lead in the second half. Stafford was enjoying a 13-3 lead entering the third quarter before he threw an interception directly to Ja’Whaun Bentley.

That play was followed by New England’s lone touchdown when Brady connected with James White in the end zone.

The touchdown and extra point brought the score within three points of each other. However, the Patriots were unable to add any more points to the game. It was a different story for the Lions offense. Stafford hit Marvin Jones for a 33-yard touchdown, before tacking on the extra point and another successful field goal by Prater.

The same game produced the record for the Patriots. The New England loss brought the Patriots to 1-2 on the season. The last time the Patriots were 1-2 was in 2012 when they went on to finish 12-4 before losing to the eventual Super Bowl champion Baltimore Ravens in the AFC Championship game, according to MSN.

Brady threw for only 133 yards with one touchdown and an interception. This comes after losing to the Jaguars a week prior, where Brady completed 24 of 35 passes for 234 yards. Brady made it simple: The team didn’t do enough.

Speaking of Rob Gronkowski, the Patriot’s tight end confirmed rumors of almost being traded to the Lions.

And speaking of trades, prior to the game, Josh Gordon from the Cleveland Browns was traded to the Patriots, according to SB Nation. However, Gordon was ruled inactive with a hamstring injury, delaying his debut as a Patriot.

It was a good day for Matt Patricia, but Patriots’ head coach Bill Belichick was not happy with back-to-back losses of his team.

The Patriots return to Massachusetts to host the undefeated Miami Dolphins at Gillett Stadium Sunday afternoon. The Patriots (1-2) may have a tough time trying to snap the Dolphin’s perfect 3-0 start to the season. Last year, the Patriots beat the Dolphins 35-17 in the first meeting, and the Dolphins came back with a 27-20 win at home in the second meeting.

Kate Venezio is a fourth-year telecommunication-news student at the University of Florida. Kate does it all: Behind the camera she captures emotional moments as a photographer for the University of Florida Athletic Association. She's comfortable being in front of the camera, too. Kate interviews players, coaches, fans and family members for pre- and post-game coverage as a beat reporter for ESPN Gainesville/WRUF-FM. In addition, Kate produces the sports segment for the weekly WUFT News program. There, she's responsible for writing the script in its entirety to include production commands. The presentation includes video highlights and interviews taped and edited, and Kate then live anchors the final package on a daily deadline. In addition, she writes stories for wruf.com where she informs sports fans of local, state, and national trending topics. Kate also utilizes social media as a tool to help get the stories in front of viewers.
@@kate_venezio
Previous Dan Mullen Bounces Back with Back-to-Back Wins
Next MNF Preview: Possible Shootout in Tampa