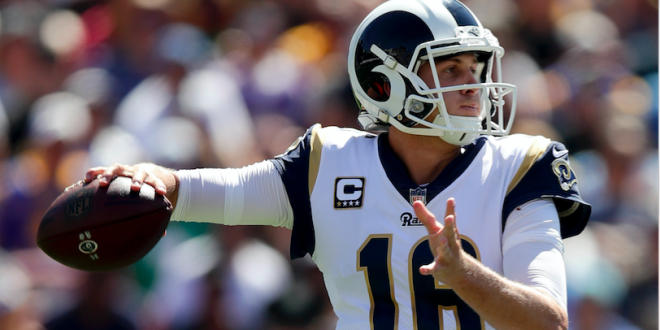 Tonight’s NFL game features the Minnesota Vikings and the Los Angeles Rams. Both team’s quarterbacks have been playing extremely well, which could make for a high scoring game. But the Vikings will have a lot to take on when they play in California this evening.

To say the Rams are playing pretty good right now would be an understatement. They are 3-0 for the first time since 2001, taking down West Coast foes like the Arizona Cardinals and the Oakland Raiders. Most of their wins have been extremely dominant, the only team keeping it somewhat close being the Los Angeles Chargers. They still lost by 12.

Quarterback Jared Goff has been posting some incredible numbers. He currently sits at a 70.3% passing percentage, thrown six touchdowns and has a total of 941 passing yards.

See you all Thursday night! Let’s do it again! #GoRams pic.twitter.com/DMxRR5j1ir

And, he’s surrounded by teammates that are playing just as well. Todd Gurley III and Brandin Cooks are tearing up the field. Gurley, with five TD’s, leads the team in scoring and Cooks has picked up 336 receiving yards. The team’s defense is led by Cory Littleton – he has 26 tackles and one interception on the season.

It seems like it’ll be a handful for the Minnesota Vikings to take on, who have been struggling early on this season.

Ready for the Rams. #Skol pic.twitter.com/Yac8RNZSTC

Right now, Minnesota sits at 1-1-1. After opening up the season with a win against the San Francisco 49ers, they ended in a tie against Green Bay in Week Two. Coming back from 13-down in the game to force extra minutes, kicker Daniel Carlson missed two field goals in overtime that would have solidified the win. The Vikings are now coming off a blowout 27-6 loss to the Buffalo Bills, who some fans consider to be one of the worst teams in the league, as they take on the Rams on the West Coast.

Like the Rams, there are Vikings players who have started off with impressive stats. Quarterback Kirk Cousins has 965 passing yards on the season, throwing for seven touchdowns.  He’s played well on the field with receiver Adam Thielen, who already has 32 catches and a touchdown.

Certainly, it’ll be a tough road game for the Vikings as they face the top team in the NFC West, who looks to stay undefeated. Kickoff is at 8:20 and you can get live coverage here on WRUF.

August is underway and that means the NFL season is right around the corner. The …