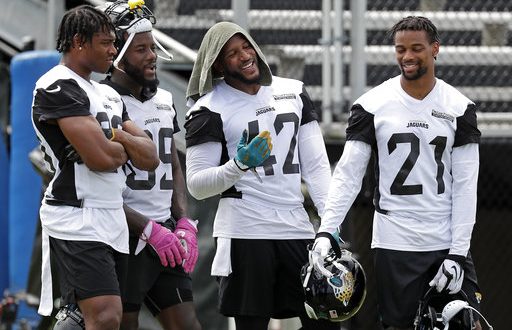 Will the Jaguars Bounce Back Against the Jets this Weekend?

The Jacksonville Jaguars look to bounce back this week in a home game against the New York Jets at 1 p.m. The Jaguars enter the game at 2-1 while the Jets enter the game at 1-2 with both teams coming off of losses. An interesting matchup to look forward to will be rookie quarterback Sam Darnold against an intense Jaguar defense.

The Jaguars had a rough week last week, losing to the Tennessee Titans, a division rival with a score of 9-6. The defense did their part but will the offense come alive this week? The defense has addressed playing against Sam Darnold and appear to be ready after hearing defensive coordinator Todd Wash speak on Darnold.

The Jaguars are hoping to get Leonard Fournette back this week after missing the pass two games with a hamstring injury. Blake Bortles also is looking for a bounce back game after just throwing for 155 yards and posting a 19.4 QB rating.

“It’s a huge difference going 3-1 from 2-2; it’s the difference in going from a great start to an average start,” Jags Defensive Lineman Malik Jackson said. “Hopefully we can go 3-1, that’s what we’re shooting for, but we’ve got a good team in front of us so we’ll see.”

We look forward to the Jaguars getting off to a quick start Sunday.

Sam Darnold is ready to roll.  The Jets are looking to get a win this week after falling short to the Cleveland Browns last week in a close game. Darnold is currently tied with another quarterback with a league leading 5 interceptions.

He wants to minimize these mistakes this week to lead his team to a victory. Last time the two teams faced off the Jets came away with a win, getting a big game from running back Bilal Powell, who looks to put on a repeat performance against them if not better.

This may shape out to be a great matchup, will it be the Jets or the Jags to take the win.

Kickoff is at 1 p.m. at EverBank Stadium.

Previous Will Winston Be Back to Take on the Bears this Weekend?
Next Kevarrius Hayes speaks on Gator basketball as season approaches