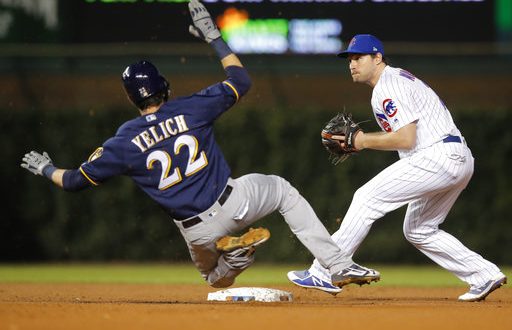 Milwaukee Brewers' Christian Yelich, left, is out as he slides into second base and Chicago Cubs' Daniel Murphy prepares to make a throw to first base during the fifth inning of a baseball game Monday, Sept. 10, 2018, in Chicago. (AP Photo/Jim Young)

After 162 games, the National League Central champion still isn’t decided. The Chicago Cubs and Milwaukee Brewers were neck and neck all season. Now, the two teams have to play the 163rd game of the season to decide who wins the division.

The Brewers have been dominant down the stretch. Milwaukee needed to be, given their position in the standings just a few weeks ago. At the beginning of September, the Brewers trailed the rival Cubs by five games in the NL Central standings. Then, the Brew Crew started to really pick up steam. They won seven straight, including nine out of their last ten games. A 6-5 win against the Detriot Tigers on Saturday brought Milwaukee tied with the Cubs for the division.

A major reason for the Brewers success this season has been the play of outfielder Christian Yelich. The former Miami Marlins star came into his own after leaving the Marlins, like most players often do. Yelich leads the team with a .323 batting average, 36 home runs and 109 RBI. His play has made him a strong contender for NL MVP.

Yelich’s fellow outfielder Ryan Braun says the team is ready for the opportunity.

To try and slow down the powerful Milwaukee bats, Cubs manager Joe Maddon will send a pitcher who has proven time and time again this season he can do the job. Pitcher Jose Quintana has been stellar against the division rivals this season. In six starts against Milwaukee, the left-hander is 4-1 with a 2.17 ERA. He has particularly effective against Yelich. The Brewers outfielder has a meager .091 batting average in 11 at-bats against Quintana.

The Cubs have held a slight edge over the Brewers this season. Chicago owns the season series lead 11-8. In nine meetings this year with the Brewers in Wrigley, the Cubs have won six of them.

More Than The Division

The road to the World Series will be easier for whoever wins the tiebreaker. The road for the loser, however, gets a bit longer. Whoever loses this tiebreaker has to return to the diamond tomorrow to play in the Wild Card Game against the loser of the Los Angeles Dodgers and Colorado Rockies tiebreaker.

This tiebreaking game in the NL Central takes place today at Wrigley Field with first pitch set for 1 p.m. 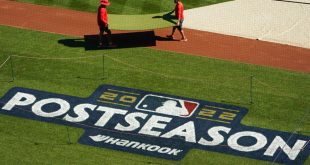 While the Los Angeles Dodgers and Atlanta Braves wait in the NLDS, two highly competitive …