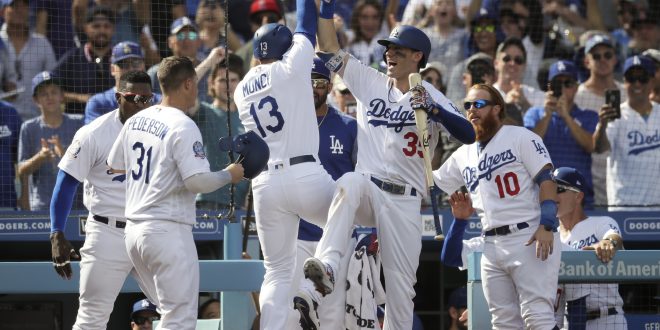 The L.A. Dodgers secured the NL West seed in Monday night’s one-match NL West tiebreaker away against the Colorado Rockies. Each team entered the matchup with identical records of 91-71.

The Dodgers went 12-7 for the season against the Rockies, and have now earned their sixth consecutive NL West title.

Dodgers pitcher Walker Buehler held his own both defensively and offensively. The rookie pitched 6 2/3 one-hit innings and earned his first career run.

In light of the win, manager Dave Roberts had a lot of praise for his Dodgers clubhouse.

“This is a group that just was relentless. So for us to be in this clubhouse and to watch Matt Kemp, Yasiel Puig, Manny Machado, all these guys enjoyed this moment … Cody Bellinger, you know, it’s a special moment for me,” Roberts said.

Both Bellinger and Max Muncy put up two-run home runs for the night, defining an offensive movement that the Rockies struggled to keep up with. Pitcher Max Marquez gave up four allowed runs and five hits within 4 2/3 innings.

When it mattered least, the Rockies showed up in the runs column. The ninth inning brought them two back-to-back runs from Nolan Arenado and Trevor Story, but it wasn’t enough to stave off the dominance from the Dodgers.

Arenado’s run in the final inning was his 38th of the season, which earned him his first NL home run title.

Even with the division title gone, the Rockies’ Wild Card hopes remain alive. They’ve found themselves for the second year in a row fighting to earn the NL Wild Card spot, after having lost it to the Arizona Diamondbacks in 2017.

Tuesday night’s NL Wild Card showdown against the Chicago Cubs will decide the Rockies’ playoff fate. The first pitch is scheduled for 8:05 p.m., airing on ESPN.

Previous Gator Basketball Lands 4-Star 2019 Center: Commits to Florida Over FSU
Next Le’Veon Bell to report to the Steelers