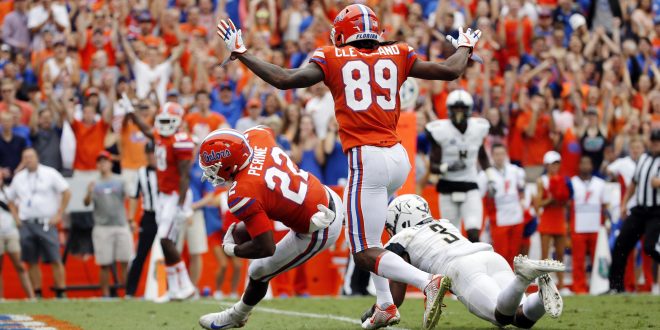 Sep 30, 2017; Gainesville, FL, USA; Florida Gators running back Lamical Perine (22) runs the ball in for a touchdown against the Vanderbilt Commodores during the first half at Ben Hill Griffin Stadium. Mandatory Credit: Kim Klement-USA TODAY Sports

Lamical Perine isn’t getting as many carries as he did the last two seasons, but he is making the most out of every opportunity.

The Junior running back has rushed for 170 yards on 29 carries. He is averaging 5.9 yards per carry with his longest one being 23 yards.

The Mobile, Alabama native has been watching old game tape of other running backs to get better at catching passes out of the backfield.

“Going on Youtube and learning from their game,” Perine said. “I have always been told that if you can catch out of the backfield that it will take you a long way. T.J. Yeldon, I like him. There are a lot more players, I used to like Reggie Bush when he was playing.”

Getting Ready to Get Physical

If anybody on the Gators roster knows what it takes to go up against LSU, it is Perine.

The running back was a Freshman when the Gators made the infamous goalline stand in Baton Rouge to clinch the SEC East in 2016. Last season’s LSU game also treated Perine well as he rushed for 70 yards and two touchdowns against the Tigers.

This drive was all Lamical Perine. @GatorsFB strikes back. pic.twitter.com/N7Qdk6FI0y

He talked about how the game is always an intense one, even for the “DBU.”

When it comes to not getting as many carries as he used to Perine says he isn’t worried and that he’s just trying to make the most out of each carry because he doesn’t know when the next one will come.

“Once you get out there you gotta make the best out of it,” Perine said. “Just do good, man. Because you will never know when you’re going to be back out there.”