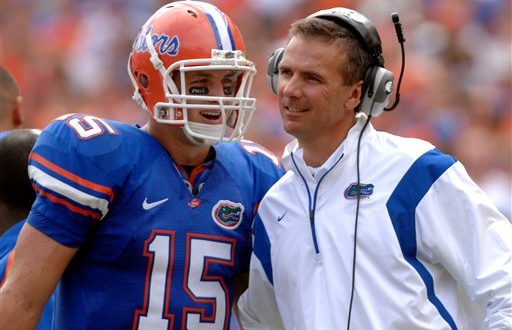 Urban Meyer Reflects on 2008 Gator Team Ahead of Recognition

The 2008 Florida Gator championship team is reuniting this weekend in the Swamp for the Florida vs. LSU game. Ohio State head coach Urban Meyer took some time to reflect on his 2008 championship Gator team.

The Gators impressive 2008 team was built on more than just physical talent. Florida had a special kind of closeness that carried onto the field. While Tim Tebow might be the first leader people think of, Meyer spoke about Florida’s advanced leadership skills and other players who stepped up throughout the season.

The 2008 team ended up going 13-1 with their only loss coming from Ole Miss. They outscored opponents 611-181 that year, averaging almost 31 points per game more than their opponents. Eventually, 19 players on the roster would go to the NFL and make an impact there too.

Tim Tebow and “The Promise”

Tebow impacted Florida both on and off the field. Meyer spoke about Tebow’s leadership when it came to game time for the Gators.

“On the field was the most intense and fierce competitor I’ve ever been around,” Meyer said. “His ability to raise the level of play around him for the right reason is really historic; he was that good.”

Perhaps one of the most memorable moments of the 2008 season was “The Promise” speech delivered from Tebow. The Florida quarterback gave the speech after an unexpected loss to Ole Miss at home.

On This Date: 10 years ago, @TimTebow made The Promise. pic.twitter.com/rRwBazevDZ

Meyer said this was a turning point in the season for his team. He recalled David Nelson coming into his office after and asking what else he could do to impact the program.

The Gators came out the next week against Arkansas and struggled in the first half. Though Florida pulled out a win, Meyer said he felt the team’s personality change during their next game against LSU.

The Gators host fifth-ranked LSU Saturday at 3:30 p.m. The 2008 team will be honored on the field at a time-out during the game.

Born and raised at the ballpark! Typically quiet- until it comes to sports. I'm a South Florida native with a passion for baseball nearly as strong as my faith. Grew up in garnet + gold, turned out sporting orange + blue. Likely to be found with a camera. And yes, I take food pictures.
@victoriarossman
Previous Gators RB Lamical Perine Previews LSU
Next AL Wild Card Preview: Yankees’ Severino Against A’s Hendriks

On Sunday, the Jacksonville Jaguars fell to the Arizona Cardinals 31-19 dropping them to 0-3. …