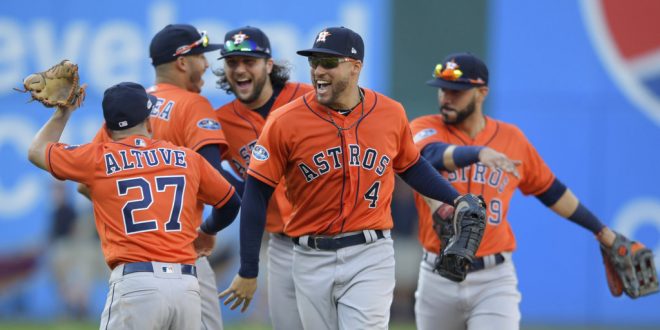 Astros Advance to AL Championship After 11-3 Win Over Cleveland

The defending World Series Champions, the Houston Astros, are heading back to the AL Championship Series for a second straight year. They completed a divisional sweep of the Cleveland Indians Monday with an 11-3 Game 3 win.

Astros Outfielder George Springer said what they accomplished spoke volumes about the talent of this Astros team.

“I think for our team to come in here and play our game against a very very great team over there, a quality lineup with a great staff,” Springer said. “I think it says a lot about our team and what our team was able to do.”

Springer homered twice in the game and Carlos Correa hit a three-run homer for his first hit of the postseason. The team as a whole hit eight homers in the series.

The Indians seem to always just miss the ball when it comes to the postseason. This is the second year in a row the Indians have been beaten in the first round – New York came back from a 2-0 deficit in 2017. Now they can only celebrate 71 years of not winning a World Series, the longest drought in the MLB.

The team was swept for the first time since the 1954 World Series. It’s not hard to see why. The team was only hitting .144 and was outscored 21-6.

Indians shortstop Francisco Lindor, who gave the Indians their only lead in the game when he homered in the fifth, said the Astros deserve it.

Cleveland used Trevor Bauer as a reliever this series and his performance Monday was what really sealed the Astros victory. Bauer faced 10 batters and retired four of them. He’s made five errors in his career and just in the seventh inning of Monday night’s game, he had two.

The Astros will try and continue their good fortune against the winner of the New York Yankees and Boston Red Sox series. The AL Championship series starts Saturday.

Courtney Mims is a junior telecommunications major at the University of Florida. She enjoys covering all Gator sports and drinking gallons of Starbucks coffee while doing so.
Previous Mullen Making Money Moves
Next Dodgers win: Return to the Nation League Championship Series