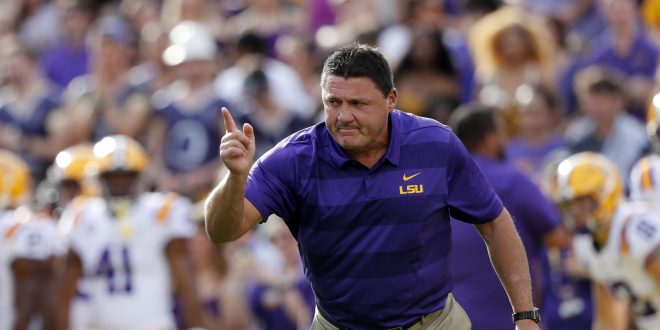 FILE - In this Sept. 8, 2018, file photo, LSU head coach Ed Orgeron leads his team before an NCAA college football game against Southeastern Louisiana, in Baton Rouge, La. Orgeron was the odds’ on favorite to be the first SEC coach fired but has his Tigers are one of the league’s last undefeated teams. (AP Photo/Gerald Herbert, File)

LSU will see another test from the SEC East this week.

The undefeated No. 2 Georgia Bulldogs head into Baton Rouge for a showdown with the No. 13 LSU Tigers on Saturday afternoon.

This is the first the two teams will faceoff since their high-scoring classic in Athens, Georgia during the 2013 season. LSU leads the overall series 16-13-1.

It’s going to be special on Saturday! #WallpaperWednesday pic.twitter.com/w7cjCuPNKR

These two programs last saw each other in Georgia’s Sanford Stadium in 2013 and haven’t met in Death Valley since 2008.

The then-No. 9 Bulldogs and No. 6 Tigers combined for 85 total points on that afternoon of Sept. 28.

Georgia bested LSU 44-41 on that day. Aaron Murray’s four passing touchdowns and one rushing score coupled with a critical defensive stop with less than one minute left to down Zach Mettenberger’s and Les Miles’s squad.

This is also the 11th time LSU and Georgia have squared off as ranked opponents. Both teams are tied at five apiece when it comes to ranked matchups with three of them coming in Atlanta for the SEC Championship.

A Line of Scrimmage Game

The Tigers will face a test in the trenches for the second straight week. They’ll face a Georgia rushing attack that leads the conference at 245.2 yards per game. They sit at third in the SEC in rushing yards allowed at 113 yards per contest.

“I thought Micah played well, but he had five missed tackles,” he said. “I think so did some other guys. Jacob is experienced and I plan on him to be full speed on Saturday afternoon.”

He said it was disappointing for the defense to surrender 150 yards on the ground to Ole Miss and 215 against Florida.

They have started a new combination on the offensive line every game so far in 2018 and have allowed 13 sacks to opponents so far this year. It is a position that has lost key members to injury.

But, Orgeron said the team is still going to do what it has been doing offensively all season so far: getting running backs Nick Brossette and Clyde Edwards-Helaire going along with being consistent in the passing game.

We’ll see if the Dawgs will trip up on the Bayou or if the SEC East will hand the Tigers their second straight loss.

Previous CFB Preview: Three Questions for Auburn vs. Tennessee
Next Thursday Night Football Preview: Next Step in the Giants-Eagles Rivalry