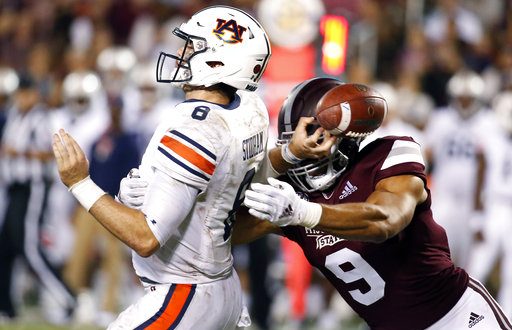 The Auburn Tigers will take on the Tennessee Volunteers Saturday at 12 p.m. Officials do not plan to reschedule the game barring any unforeseen weather patterns.

What ever happened to the Auburn running game?

What was widely expected to be a strength for the Tigers has been a glaring weakness. If Auburn’s run game is churning, it isn’t utilized enough. When the run is struggling, it’s employed less.

For example, in last week’s loss against the Mississippi State Bulldogs, running back JaTarvious Whitlow plunged the defense for 11 yards per carry and 88 yards. It doesn’t take a math major to figure out Whitlow only got eight carries.

The week prior, running back Kam Martin garnered 24 carries for 90 yards – a paltry 3.8 yards per carry.

Will Tennessee’s O-line ever show up?

The above question should be the one on every UT fan’s mind. The offensive line has been downright atrocious.

The Vols have spent their last two games getting absolutely thrown around by the likes of Florida and Georgia. Although the two teams are arguably the best in the SEC East, the line left head coach Jeremy Pruitt disappointed. He also talked about Auburn’s running game (or lack thereof).

Quarterback Jarrett Guarantano has spent much of the season on his back, as well. Georgia sacked him twice and Florida got him once, but the amount of knockdowns and QB pressures was tangible.

If Tennessee wants to pull off the upset, the offensive line will have to have a big game.

Is Malzahn on the hot seat?

Malzahn signed a seven-year extension with Auburn this offseason, but that doesn’t mean he’s in the clear. The Tigers came in this year with a nice hill of expectations, and they currently sit at 4-2 while being 1-2 in the SEC.

AU’s loss to LSU wasn’t terrible at the time. A last-second field goal dropped the Tigers. But last week, the Florida Gators exposed the weaknesses within the LSU offense, making Auburn’s loss a little worse.

Last week’s loss to MSU was…well, ugly. The offense looked anemic, and QB Jarrett Stidham has fallen well short of expectations thus far into the year. He went 19 for 38 against the Bulldogs, good enough for a 27.9 QBR and terrible mark of 5.6 yards per attempt.

A resounding win over the Volunteers would do a lot for Malzahn’s case. If he loses, expect the seat to get very warm.

Chris O'Brien is a rising sophomore at the University of Florida. He aspires to be an on-air sports anchor someday.
Previous Friday Night Lights: Trinity Catholic Battles Santa Fe
Next Dawgs Travel to Death Valley